Dwayne Johnson Gets Cut During A Training Session In The Iron Paradise, And Licks His Own Blood 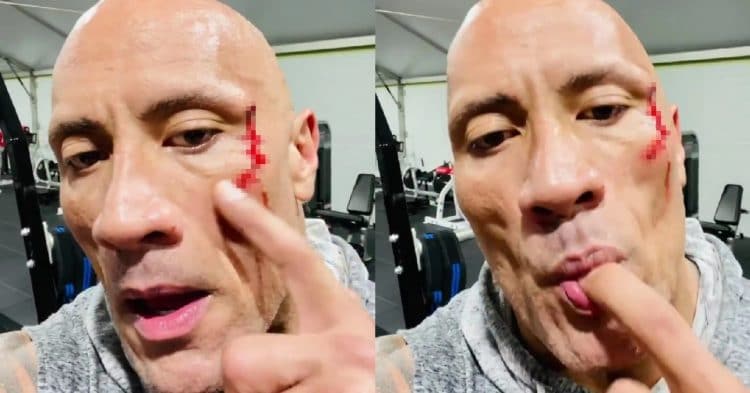 If you have ever seen Dwayne Johnson during a training session in his Iron Paradise gym, you’ll know that sometimes things get intense. One of these recent sessions saw him wind up needing stitches by the time it was over.

The man they call the Rock is not one for skimping on a training session. Few celebrities have the same level of dedication to athletics in the way that Johnson does, from building his own killer home gym, to even creating his own bodybuilding contest and producing a documentary about the return of Phil Heath. He always gives it his all in the gym, and makes fitness as much of a part of his super busy life as anything else.

However a recent training session from Dwayne Johnson saw him taking a bit of a knock to the head, resulting in a cut above his eyebrow. Apparently, as he explained in an Instagram post, he got smacked in the head with 50lb chains he was using, resulting in the cut and later stitches. However in the most badass way possible, he swiped his finger through the blood, licked it, and then kept working out.

“We ain’t playin’ tiddlywinks and we ain’t reciting nursery rhymes – it’s called the #ironparadise for a reason and things get extremely intense.

Taste your blood, keep training and stitch up later – rules of the house.

And I can confirm my blood tastes like Teremana, calluses and BlaMoan (black and samoan) Hot Sauce🩸🤣😈💪🏾

Have a productive week, my friends – keep it light and a lil’ fun, but get after it like a MF.”

That is quite the savage approach to handling this cut from Johnson. It is fitting to see him act like it is nothing, considering that these types of things are somewhat commonplace in high intensity training environments. Like he said, all you can do is keep going, even with a minor cut like that.

“Alright look sometimes, well oftentimes, things get intense here in the Iron Paradise. But we ain’t playing tiddlywinks, and we ain’t reciting nursery rhymes. Alright, you get lumped up every once in a while and things happen. That’s good,” Johnson said after licking his blood. “That’s real good. Back to work.”

Lately Dwayne Johnson has been working on preparing for his role as Black Adam in the upcoming superhero flick. Obviously it takes some intensity to get in super hero shape, but he seems to be taking it in stride.