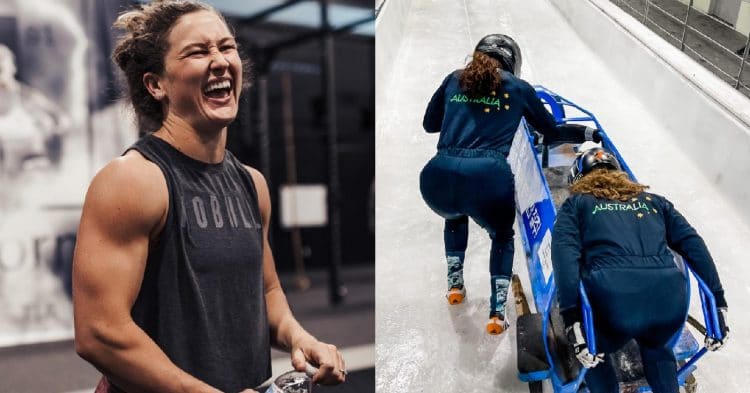 CrossFit’s four-time Fittest Woman on Earth® Tia-Clair Toomey is well on her way to becoming the first CrossFitter to appear in both the Summer and Winter Olympic Games. Last week she participated in her first official race for women’s bobsledding and took two wins home with Australia at the New Horizon races in South Korea.

Tia-Clair Toomey is using the off-season of the CrossFit season to train with the Australian women’s team in the hopes of qualifying for the 2022 Beijing Winter Olympics. Last week’s two wins will help her there.

In December 2020, we reported when Tia announced a short-term move from Cookeville, Tennessee, to South Korea for the training. She moved with her CrossFit coach and husband Shane Orr and spent the holidays in a hotel in quarantine before beginning her training.

She calls the ice house, an official bobsled term, her new gym.

And, it looks like her training is paying off.

Tia was working with bobsled pilot Ashleigh Werner in a two-man bobsled for last week’s races. Tia’s role in the event is as the brakewoman on the bobsled. This is the athlete that pushes the bobsled on ice in 14-degree Fahrenheit temperature and then sits in the back of the bobsled while the pilot steers the machine down the ice.

Tia posted the race on Instagram and said she had spent all last week training to learn what “race week” was all about. Showing her true competitive spirit, she said she LOVED every minute. Nobody is surprised.

She obviously has a short learning curve when it comes to competing, in anything.

“There is still a lot to learn and fine-tune, but I can officially say I have done my very first Bobsled race.
This week has been all about learning the in’s & out’s of ‘race week’ and I have LOVED every minute of it.”

Tia has been looking forward to this moment since May 2019 when the Australian women’s team touched base to recruit her as a hopeful for the 2022 Beijing Winter Olympic Games from February 4, 2022, to February 20, 2022.

She’s been training in South Korea since the beginning of this year and has been largely training on ice. If she qualifies for the 2022 Olympic Games, she’ll be the first CrossFitter to compete in both the Summer and Winter Olympics.

The Bobsled and CrossFit Love Affair

Many fans of CrossFit will recognize that Tia is not the first CrossFitter to try their bobsledding shoes on.

Australian James Newbury is also training for the 2022 Winter Olympics. He’s also a brakeman and has taken the thirteenth place position at the International Bobsled and Skeleton Federation (IBSF) European Cup last month on January 15, 2021. He has noted on his Instagram page he is looking forward to getting home for the CrossFit Open, so James Newbury fans will be happy to see he is going to be just as involved in CrossFit this year as ever.

Team USA for the Winter Games also has CrossFitters already on board. Two-time CrossFit Games athlete Colleen Fotsch is on Team USA, and Blaine McConnel is on Team USA. CrossFitter Kelsey Kiel did not make the team this time around but has tried her hand at bobsledding.

CrossFitters find a transition to bobsledding natural, as the sport requires the running of an elite athlete, who has experience in weight training. CrossFit is a sport that also uses obstacles and objects to carry, push, or use during competition. Bobsledding is a natural sport for these athletes.

Is Tia-Clair Toomey Coming Back to CrossFit?

At this time we do not know if Tia-Clair Toomey is coming back to defend her Fittest on Earth title for the 2021 CrossFit Games. The seasons have a fair overlap, and the CrossFit Open is just a few weeks away.

When she moved for the short-term to South Korea, she and her husband Shane Orr had to stay in quarantine for two weeks. On the announcement of their move, they noted it was just going to be a short training period for a few weeks.

Tia-Clair Toomey may well return to Cookeville, Tennessee, by the time of the CrossFit Open. If she will be competing this year, we will let you know.

Blessing Awodibu Plans To ‘Shock The World’ With His Pro Debut: ‘Everybody’s Going To Hate The Boogeyman’