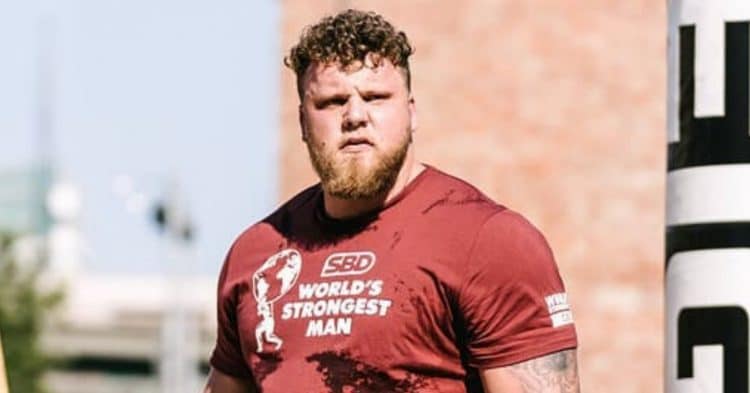 Scottish strongman fans were excited to see Tom Stoltman competing for the title of Europe’s Strongest Man. However he has been forced out from the contest, mere hours before it starts.

Stoltman shocked the world by becoming the first Scottish competitor to win the World’s Strongest Man, earlier this year. Following this massive performance, he was expected to make his first appearance since the WSM, at the 2021 Europe’s Strongest Man, set for September 4th, in Leeds, England.

Unfortunately it seems that this will not be the case, as Tom revealed that he has been forced out of this contest. He and his brother Luke posted to YouTube to reveal that he will not be competing due to testing positive for COVID-19, and being required to quarantine.

“I got COVID yesterday, so on Thursday. I’ve now got it, Thursday night. So for safety I will not be competing during the weekend. I feel like for me, it’s just a cold,” Tom Stoltman said.

“We’re going to try and stay safe, and then we’re going to be there in Scotland. I have to quarantine until Wednesday or Thursday next week, so I still have a lot of time to train for Scotland. For me, it’s beneficial because I didn’t have the best prep for Europe’s anyway… Sorry that I won’t be there. It’s out of my hands.”

This is a shame to hear, with there being so much intrigue to see how Stoltman would look in his first contest since World’s Strongest Man. He was initially tapped to compete in the 2021 Shaw Classic, until a family wedding forced both he and Luke out.

That being said, Tom now has his eyes on Scotland’s Strongest Man, which is slated for September 19th. By then, he should have plenty of time to heal up, and get into contest shape so that he can be back at his best.

In the meantime, Luke Stoltman will still continue on to the 2021 Europe’s Strongest Man, where he will look to beat out a tough lineup of strongman. Easily the most interesting aspect about his appearance on the roster, is the World Log Lift Championship, which is featured on this contest, and is one of Luke’s strongest events.

While the Europe’s Strongest Man is still going to be an exciting contest, it will definitely be missing something with Tom not competing. Hopefully he and his family have a speedy recovery, and no lingering issues.