Complete results, and prize money for the 2021 Shaw Classic 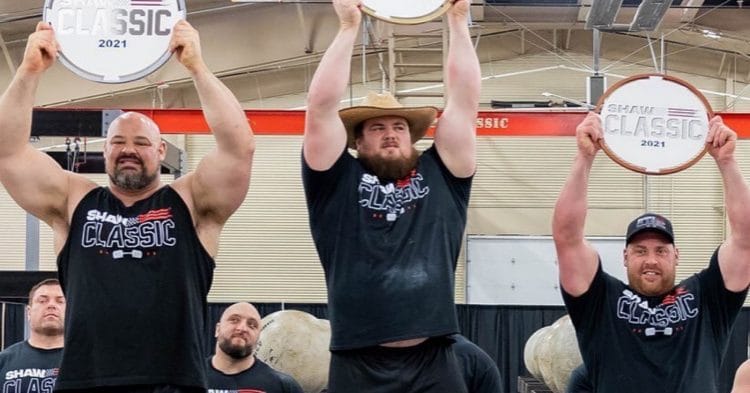 The 2021 Shaw Classic took place August 27th and 28th, in Estes Park, Colorado. Here is a complete breakdown of all the action that transpired from this insane strongman contest.

After a strong inaugural year, the Shaw Classic returned this year with a bang. Not only were there more athletes competing, but the arena was bigger, and the prize money more lucrative.

Put on by four time World’s Strongest Man winner Brian Shaw, he made sure that this contest was as big as he could make it. Of course, without the athletes showing up and performing at their best, that never would have been the case.

In the end, it was Trey Mitchell III who wound up the winner of the 2021 Shaw Classic. Coming in second was Brian himself, who won the first edition of the contest and who divided his own prize money among the other strongmen, while JF Caron finished in third place.

Unfortunately specific details on the events are sparse, as there were issues with the online stream for the PPV, which was purchased on the Shaw Strength website. Brian addressed these issues following the contest, with a post to his Instagram, apologizing for the tech difficulties.

Specific details of the how each event played out at the 2021 Shaw Classic are still limited. However below you will find the winners of each event, with more information to be added as it becomes available.

With athletes taking turns pressing logs of increasing weight, it was Bobby Thompson and Trey Mitchell who each did the heaviest successful press at 455lb. Bobby attempted a new American record at 480lb, but came up short.

Competing in pairs and being scored for time, competitors were tasked with carrying a 1180lb yoke 80 meters, only being allowed to drop it once. Evan Singleton finished in 30.61 seconds, winning the second Shaw Classic event.

Bag Toss Over The Bar

Again scored for time, athletes tossed eight bags, ranging from 50-65lb, over a 15ft bar. Maxime Boudreault won this contest with easy, hoisting all eight bags in a time of 28.25 seconds.

The final event in the first day of the 2021 Shaw Classic saw the strongmen squatting a roughly 817lb Ford Bronco for max reps, in 70 seconds.

The Hummer Tire Deadlift is a fun event, and a favorite of Brian Shaw. Last year’s Shaw Classic saw JF Caron score a new world record in this event, so anticipation was surely high to see what these men could do.

Athletes carried two 300lb to a loaded wheelbarrow, before adding the bags in and pushing the 2400lb load to the finish line. Following this, they completed an arm-over-arm medley with the entire event being scored for time, which saw Evan Singleton on top.

A classic strongman event, the men were given the task of clean and jerking 242lb dumbbells over their head, for max reps in 75 second. Evan Singleton won this event too, at 7 reps, while Trey Mitchell landed in second with 6 reps, and JF Caron completing 5 reps to come in third.

The final event of the 2021 Shaw Classic was the traditional Atlas Stone-off, with competitors hosting five stones ranging from 350lb-450lb, onto podiums as fast as possible, within 60 seconds.

Congratulations to all the athletes who put it all on the line at the 2021 Shaw Classic. This contest is truly becoming one of the most intriguing in the sport.