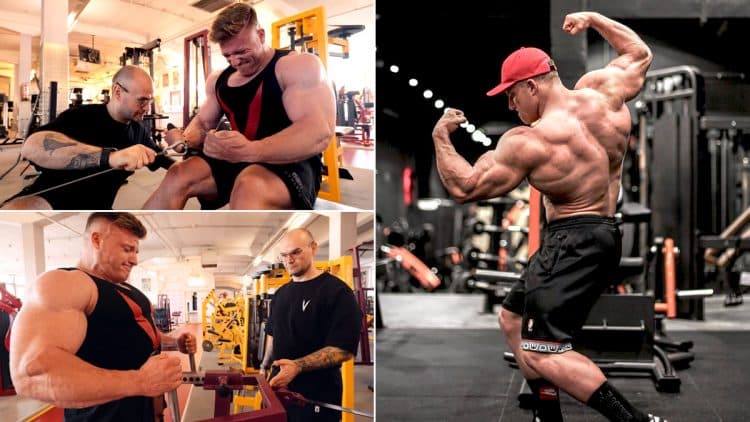 Classic Physique bodybuilder Urs Kalecinski went through a rigorous back workout. He last competed at the 2022 Arnold Classic and finished third behind the winner Terrence Ruffin and runner-up Ramon Rocha Queiroz. ‘The Miracle Bear’ had an amazing run in 2021 as he was placed second at the IFBB Extreme Bodybuilding and Fitness Pro in July 2021 and won the 2021 Tampa Pro that took place on August 6th and 7th. The 24-year-old took the bodybuilding community by surprise when he secured fourth place at his Olympia debut in 2021.

After the 2022 Arnold Classic, Urs took time off to improve his physique. He recently started his competition prep for the 2022 Olympia. The German bodybuilder’s back is admittedly the weakest part of his physique and he worked to improve it in a recent training session under famed IFBB Pro coach Stefan Kienzl’s guidance. The video of this session was uploaded on Urs Kalecinski’s personal YouTube channel.

Urs Kalecinski started the back workout ‘in a classical style like Dorian Yates’ with Straight-Arm Pulldown. This is a compound movement that works the lats.

Coach Stefan Kienzl stated that Yates performed this movement with the Nautilus machine. The Hammer Strength machine is a widely accepted variation of this movement. However, he clarified that Kalecinski’s body mechanics are such that a cable machine turns out to be a better choice for him. This also enables him to perform this movement at any location as cable machines are available in most gyms around the world.

Expanding further on the benefits of cable Pullovers, Coach Kienzl said that this movement is an excellent choice for both opening as well as finishing movements for a workout. He added that Pullovers negate the role of biceps in the pulling action and hence target the back muscles to a greater degree.

‘The Miracle Bear’ performed a few sets of this exercise to get the blood flowing into the back muscles and moved on to the next exercise.

High rows on the plate-loaded machine

Urs next took to an essential exercise for upper back thickness – high rows. This is a compound movement that works the middle and upper back muscles. Kienzl shared some valuable insights on common mistakes people make in back workouts and said:

“The main mistake most people make when training the back is that they lose stability in the chest and collapse (slouch forward) during a workout. Once you lose stability you overuse your arms a lot instead of using your back because bio-mechanically your position then cannot control that anymore.”

Following the coach’s instructions, Urs performed a few sets of this exercise and jumped on to the next one.

‘The Miracle Bear’ next performed Stefan Kienzl’s favorite exercise for developing the latissimus dorsi muscles. He explained that the first movement was a pullover and the second was rowing. This, however, was a ‘lat-row movement’ that took elements from both.

“I preferred that movement with both arms. So everyone can adjust that how he likes,” Kienzl added.

Urs Kalecinski performed a few sets of this movement and went on to perform the seated rows next.

The next exercise of the day targeted the upper back muscles and the lats. Urs Kalicinski performed the exercise with narrow handles and jumped onto a bodyweight exercise next.

Kalecinski rocks cable rows throughout his set with strict form. His lats pull the weight back as he leans forward during the lift.

Pull-ups were the only exercise in The Miracle Bear’s back workout that did not involve machines or weights. It is one of the most effective exercises for building upper body strength and back muscles. He performed a set of pull-ups and moved on to the final exercise of the day.

This movement served as the finisher for the back workout. Urs said that he has a tendency to raise his shoulders during rows. This results in only the upper back muscles getting activated while the mid and lower back remains inactive. To fix this, coach Kienzl instructed him to do the exercise on a plate-loaded seated rows machine but standing. This variation inevitably places the handles at a much lower level compared to when they are while seating. The small difference stops the person from raising their shoulders and engages the lower and mid-back muscles.

After getting a few good sets in under the famed coach’s guidance, Urs wrapped up the back training session.

After the workout, coach Kienzl stated that he is extremely satisfied with Kalecinski’s progress. He revealed that Urs has not had the opportunity to make real off-season gains after March 2021 as he had to be in prep constantly for the 2021 Mexico Pro, Tampa Pro, the 2021 Olympia, and the 2022 Arnold Classic. He then compared Kalecinski’s Physique from March 2021 to how it is now and said:

“Speaking the truth, not a single muscle that has not improved. Great!” Kienzl said.

While addressing the weaknesses, Kienzl added:

“The lat has improved greatly in size and I hope the same for thickness which would impact his greatest weakness – the double biceps from behind where we need more muscle thickness. We lack mobility there right now too. We also lack a bit of an idea on how to best show outlines properly on the back too.”

However, he showed faith in his pupil and concluded that Urs is dedicated to his craft and will find a way to tighten loose ends.

Stefan Kienzl’s positive criticism will certainly motivate Urs Kalecinski and help him achieve his goals in the sport of bodybuilding. It won’t be surprising at all to see Kalecinski bring a top 5 worthy Physique at the 2022 Olympia.

Toward the end of the video, Kalecinski provides an update on his physique in preparation for the 2022 Olympia. It is evident from the poses he runs through that he is on the right track to gaining the muscle mass to contend against world-class bodybuilders like Chris Bumstead.

How To Do The Lying Hip Flexor Stretch – Tips, Benefits, and Alternatives