In preparation for 2022 Mr. Olympia, bodybuilders William Bonac and Urs Kalecinski link up in Amsterdam, Netherlands to hit a demanding leg workout. 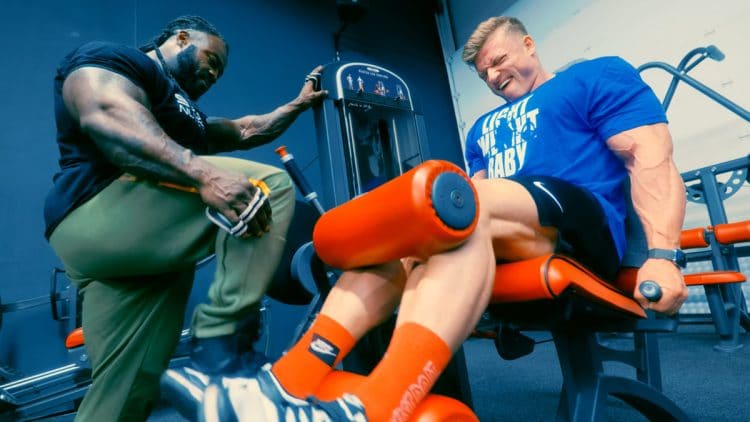 Given that legs are one of his best features, IFBB Pro William Bonac is spreading some of the knowledge he’s acquired throughout his successful career as a bodybuilder. In a recent training session posted on YouTube, Bonac coaches Classic Physique star Urs Kalecinski on how to bring up his lower body.

William Bonac is a two-time Arnold Classic champion and has remained a threat in Men’s Open bodybuilding for the last several years. He has enjoyed an incredible 2022 season in the sport thus far, earning second place at the 2022 Arnold Classic, where he was only defeated by 2019 Mr. Olympia Brandon Curry. It was an incredibly close competition and following his runner-up showing, Bonac promised to bring up the areas that prevented him from winning another Arnold title.

Bonac returned to compete at the 2022 Boston Pro where he left no doubt in the judges’ minds, winning first place in a dominant fashion. Bonac has undergone surgery to fix his gyno/abs and voiced that he doesn’t want to ‘give excuses at Olympia‘ this year. William wasn’t the only bodybuilder to leave a lasting impression at the Boston Pro, as Germany’s Urs Kalecinski walked away in first place competing in Classic Physique. Considering that Classic was featured last on stage, many believe that was an early indicator that the division is becoming more popular than Men’s Open.

Kalecinski followed up the performance by winning first place at the 2022 Kuwait Classic Pro. With their eyes locked on Olympia, Bonac and Urs joined forces to get the most out of their recent training session.

Bonac and Kalecinski start the workout which is meant to pre-exhaust the muscles with hamstring exercises. Afterward, they move on to working out the glutes and quads.

Below you can find a list of the full workout

Both IFBB Pros start with standing hamstring curls. During the workout, Urs makes it a point to highlight how Bonac is performing each rep since he’s focusing on the contraction and keeping tension on the muscle for the entirety of the set.

Continuing their workout, the guys move on to hip thrusts. Urs mentioned that he’s never performed the exercise before. Bonac explains that Urs will feel the delayed onset muscle soreness (DOMS) in his hamstrings and glutes tomorrow if he holds the movement at the top.

Their third exercise consists of leg curls. William opts to do the seated version since he is currently recovering from gyno surgery. Urs on the other hand decides to do two supersets of lying hamstring curls and seated leg curls. According to Bonac, by positioning the body’s joints with the machine, it’s easier to achieve a proper range of motion with each exercise.

Urs hits his fourth exercise with the machine kickback which will target his glutes and hamstrings while enabling him to build up his outer sweep. Even while using a lighter weight, both Pros admit this exercise is challenging to say the least.

The pair move on to the abductor and adductor machines next. Urs focuses on slow and controlled reps.

Urs opts to hit a couple dumbbell stiff-legged deadlifts before switching to the vertical leg press. It appears Urs doesn’t practice this workout often, so Bonac assists by setting him up on the machine correctly. Bonac offers some helpful tips to Urs, like keeping the range of motion short as part of a slow and controlled movement.

“Believe me a lot of guys would have been done already. So, yeah put them to the test man. It’s hard work you know. If you go through this and you keep doing this, it makes you stronger and stronger and gives you an advantage over the other guys.” Bonac says.

According to Urs, he doesn’t quite have the endurance to complete a workout like the 45-degree angle leg press. Bonac offers assistance by telling Urs to complete the exercise using different foot placements.

“You must hit the muscles from different angles if you want them to grow.” Bonac shared.

William helps Urs get situated on the squat belt machine. While Urs is completing his reps, Bonac emphasizes not “overstretch the muscles”.

The high-volume workout took over 2 hours. Before ending the exercise, Bonac explains to Urs that the routine can take even longer and that a common mistake made is not training calves. According to Bonac, when the calves are stronger, that prevents potential injuries from occurring.

During their time away from competition, Bonac and Urs are making sure to push the pace during training. Both Pros intend to stay in the winner’s circle this year as they continue their off-season prep for 2022 Mr. Olympia.