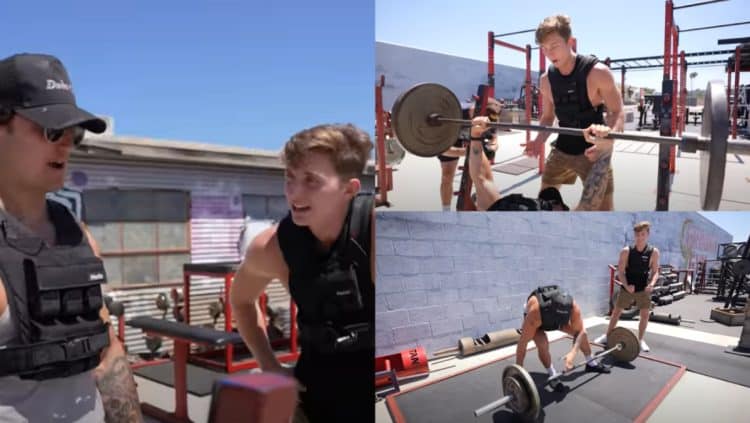 Former Navy SEAL and ultramarathon runner David Goggins is widely respected for his dedication to keeping a high fitness level. He has used intense diets and training regimens to transform his physique a number of times. In a recent video uploaded on YouTube, social media sensation Jesse James West joined Brandon William to survive living like Goggins for 24 hours straight.

Fitness influencer Jesse gained popularity for his entertaining videos on YouTube. He has found success online doing different types of content that focus on fitness. With over 1.7 million subscribers, West regularly collaborates with other celebrities for workout videos and more, like in this latest video.

West likes to challenge himself to try out different workout routines and diet programs. Earlier this month, he followed in the footsteps of Liver King by eating, training, and sleeping like King, who promotes an ancestral lifestyle based on the nine tenets that he utilizes daily. West connected with his “primal” self as he ate raw meat and organs with Liver King right by his side to coach him through the process.

Jesse did a comparison video between the worst and best-rated gyms in New York City recently. Although both gyms were owned by the same company, West reported the differences he found between the $15 a month club versus the exclusive $300 per month package.

In a recent post video uploaded to his YouTube, Brandon William teamed up with Jesse James West to try living like David Goggins for 24 hours. They chose to follow the training regimen and diet Goggins used to shed off over 100 pounds in 3 months in preparations for becoming a Navy SEAL.

Since Goggins’ goal in the Navy SEAL program was to lose weight, William and West decided to wear a 30-pound vest to get the full experience for the day. They kicked things off with a full body workout at 11 am, performing 100 reps each of pull-ups, bench press, and deadlift.

West could feel the burn in his chest as he completed the workout. William and West both needed some extra rest between sets to complete the full 300 reps each.

After the intense training, they went for a run on the beach and an hour-long bike ride. They closed the day with a rewarding meal at 7 pm, consisting of chicken breast, broccoli, and white rice, which added up to around 800 calories for the day.

RELATED: Fitness Influencer ‘The King of Diet’ Explains Why He Eats 100 Eggs Everyday