Exiting shadow mode, Urs Kalecinski looks to have added some quality muscle to his physique for the Arnold. 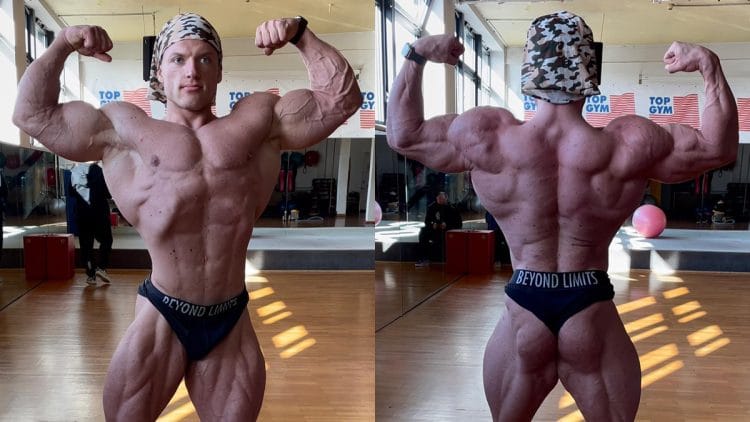 Germany’s Urs Kalecinski has been quiet with physique updates since last year’s Mr. Olympia. In his first update of the season, Kalecinski exited shadow mode with major improvements and added mass for the 2022 Arnold Classic.

Despite being the new kid on the block in bodybuilding, Kalecinski has a legitimate chance at disrupting the Classic Physique division at this year’s Arnold. “The Miracle Bear” garnered a ton of attention at the 2021 Mr. Olympia show where he managed to secure fourth place. Many were taken back by his aesthetic physique and on-stage poise, especially considering it was his first Olympia show.

Before appearing at the biggest show of the year, Urs placed second at the IFBB Xtreme Bodybuilding & Fitness Pro in July. Then, won the 2021 Tampa Pro in Aug. Now, Urs will bring his most complete package in his debut at the upcoming Arnold Classic set for March 3-6.

While he’s certainly improved his physique by leaps and bounds from last year, Kalecinski has a tall task ahead with former champions like 2018 Arnold Classic champion Breon Ansley and 2021 Arnold winner Terrence Ruffin in the mix. Both competitors managed to place higher at Olympia than Kalecinski did, and the German native is eager to outperform both athletes at the upcoming Arnold show to exact his revenge.

Size, symmetry, and conditioning all play a major role in bodybuilding shows and Urs has made advancements in all three of those areas judging by his recent physique update. After remaining in shadow mode while preparing for the Arnold, Urs Kalecinski shared his gains on his Instagram page.

“from the shadow into the light.” Urs Kalecinski shared.

If Urs can make satisfactory adjustments to his biceps, the up-and-coming bodybuilder has a shot at dethroning Terrence Ruffin. Additionally, some have pointed to Urs needing improvements to his back. Breon Ansley is great at accentuating the features in his back which is another reason why he’s had such incredible success in the sport. Regardless of opposition, Urs has gone to great lengths to make sure his body is propionate and matching his lower half.

Another young bodybuilder making a name for himself in Classic Physique is Ramon Rocha Querioz. Ramon is nipping at Urs’ heels as he placed in fifth at Mr. Olympia last Dec. which is just one place lower than Urs’ showing. Granted if Kalecinski adds more muscle mass in his arms, that could no doubt impact his placement at the 2022 Arnold Classic in a positive manner.

With the pressures of bodybuilding, sometimes competitors come in off. Whether it happens because they are flat, or if they are holding too much water, a multitude of issues can surface when it’s time to perform under the bright lights. For someone like Urs, the bodybuilder can feasibly steal his first major title if his toughest competitors come into the show at less than 100 percent.