A woman has died in a Mexico gym after being crushed by a 400lb barbell she tried to lift. 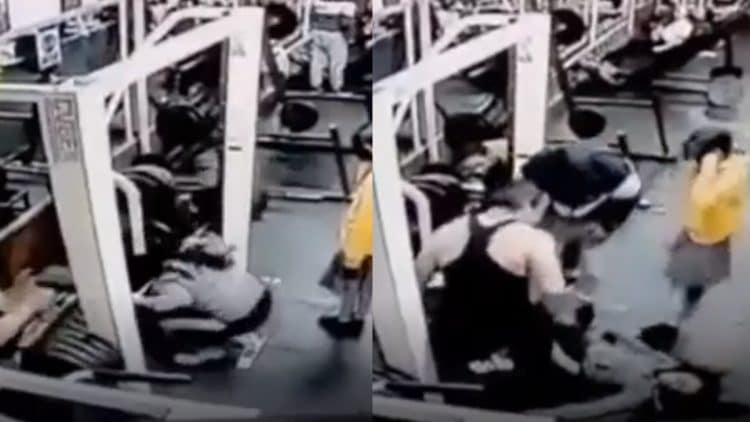 Powerlifting and safety go hand in hand, but not for this unfortunate gym-goer in Mexico recently. A woman was killed after attempting to lift 400lbs in a Gym Fitness Sport center in Mexico City and the barbell crushed her in mere seconds.

The clip begins with a man adding weight to the barbell. A woman (between 35-40 years old) attempted to squat lift the 400lb barbell on a Smith machine in front of her daughter. The heavy weight falls on the woman while crushing her neck against a bench, which appears to have killed her instantly.

Many were shocked to realize the woman only had one spotter on the left side. The daughter and man spotting her tried to free the lifter but were unsuccessful. Since the weight was attached to a Smith machine, she was unable to shrug the weight forward and position herself free.

Following the incident, a number of people rushed over to her aid after the weight slammed into her neck. In a display of horror, her lifeless body falls to the floor from a seated position after bystanders help lift the weight off her neck.

The Dangers of Lifting Improperly

Not only is proper form essential when pulling massive amounts of weight, but so are adequate spotters. Situations like these are worst-case scenarios and underline the importance of safe practices in the gym. USA Crime shared the video on their Instagram page Monday.

Warning: the video you are about to see is graphic in nature

Gyms are often a hotspot for injuries when it comes to powerlifting. With the prevalence of social media, sharing feats of strength inside the gym has become the status quo. A byproduct of that atmosphere is ego lifting. Ego lifting is when someone lifts more weight than they should and is a term used to describe lifters who are increasing their loads too fast. While lifting heavy weights and not having a spotter looks impressive, it increases the likelihood of sustaining injuries.

Last year, powerlifter Larry Wheels was involved in a scary accident that could have ended much worse. Bodybuilder Ryan Crowley sustained a career-threatening injury after an accident on the bench press. Luckily, Wheels was present and spotted the bodybuilder just in time to avoid catastrophic damage. The accident resulted in his pectoral tendon being ripped off the bone, though.

It goes to show, even with experienced spotters, it does not guarantee safety. As of this writing, an investigation has been launched by the State prosecutor’s office and further details are to be released in the coming days. The gym owner was briefly arrested while authorities gathered information and the identity of the deceased woman.

Fitness Volt sends our most heartfelt condolences to the affected family and loved ones and especially her daughter who was present at the scene.