No Result
View All Result
Bodybuilding
Evidence Based
Evidence Based Research
This article was written by one of our qualified writers, and fact-checked by our experts. The numbers in parentheses (e.g. 1, 2, 3, etc.) throughout the article, are reference links to peer-reviewed studies.
Our team of experts include a board-certified physician, nutritionists, dietitians, certified personal trainers, strength training experts, and exercise specialists.
Read Our Editorial Process

These vegan bodybuilders will make you rethink your dietary choices. 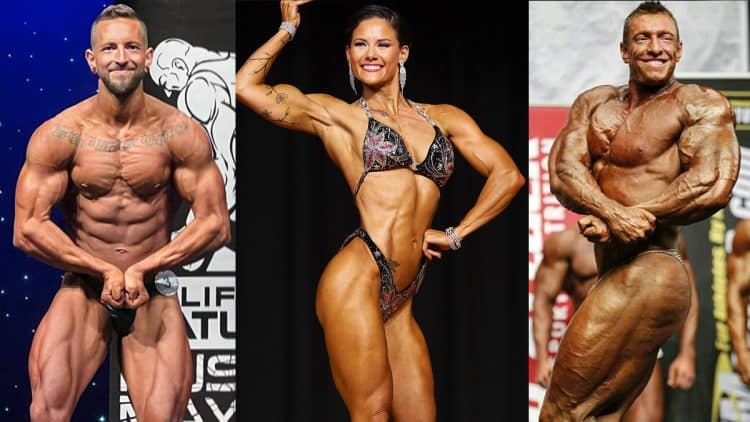 Chicken, eggs, fish, beef, and whey protein are considered staples in a bodybuilding nutrition program. Animal-based foods are rich in protein that can help build muscle mass and strength. [1]

However, there has been a recent boom in veganism. The Netflix documentary The Game Changers, based on plant-based eating, protein, and strength, added fuel to the fire and took the sports and bodybuilding world by storm. Spoiler: It had mega-stars like Arnold Schwarzenegger advocating going vegan.

A vegan diet is based on plants (such as vegetables, grains, nuts, and fruits) and foods made from plants.

While some people adopt a vegan diet to switch to a way of living that attempts to stop all forms of animal exploitation and cruelty, others buy into the philosophy for its health benefits.

A vegan diet can help you lose weight, keep your blood sugar in check and type 2 diabetes at bay, improve your heart health and kidney function, and reduce the chances of cancer, arthritis, and Alzheimer’s disease. [2][3][4]

Since most people start bodybuilding to get fitter, healthier, and improve their longevity, many fitness enthusiasts have been leaning towards veganism.

If you have been enticed by the idea of turning vegan but are looking for motivation before you make the leap, this article might do the trick.

Given below are 12 vegan bodybuilders that can give their meat-eating counterparts a run for their money:

A son of Hindu parents, Delgado was brought up in a vegetarian household.

“Growing up, my diet has always been about 95% vegan, with the exception of dairy products,” says the bodybuilder.

Delgado switched to a vegan diet in 2015 and saw his physique transform after cutting out animal products from his diet. He was one of the bodybuilders featured in The Game Changers.

Delgado turned pro by winning the NPC USA Championships in 2016 in the Men’s Physique division.

Karl Bruder is arguably the “biggest” bodybuilder on this list. Unlike Delgado, Bruder was not a born vegetarian but switched to the vegan lifestyle in 2016. While most bodybuilding fans believed that turning vegan might hamper his physique, it did the opposite for him.

A few months after turning vegan, Bruder won the tall class in the WABBA Grand Prix. Per the bodybuilder, The Game Changers pushed him to turn vegan.

Washington turned vegan in 1998, way before it gained a cult following, and has been a professional fitness model and competitive bodybuilder for over a decade.

Per the bodybuilder, an effective eating plan should be flexible, have variety, and shouldn’t cut out sweet treats. Washington is popularly known as “The Vegan Dread” because of his long dreadlocks.

Washington is an IFBB pro bodybuilder. He started competing in 2009 and won his pro card in the same year — a feat only a handful of bodybuilders have accomplished.

Zack Belknap believes that his physique improved by leaps and bounds after he turned vegan. He started competing in bodybuilding shows to prove his mettle and won his World Natural Bodybuilding Federation (WNBF) Pro Card in 2018.

Per the natural pro bodybuilder, his friend pushed him to turn vegan. However, he finally made the switch after watching a hard-hitting documentary about animal cruelty.

“One day I watched the documentary Cowspiracy, and I was horrified at the devastation to the environment that is caused by the consumption of animals. After that, I immediately made the switch and never looked back!”

Belknap’s diet consists of a lot of vegetables, spinach, chard, nuts, seeds, legumes, and non-soy tempeh made from things like wild rice, black beans, split peas, as well as ancient grains such as millet, quinoa, amaranth, and buckwheat.

Simnett is a vegan nutritionist and one of the most likable plant-based athletes on social media. He is a must-follow if you are always short on vegan recipes.

In 2011, Simnett transitioned to veganism. He also made a switch to bodybuilding from running at the same time, and there has been no looking back ever since.

Turner’s is one of the most convincing and mind-blogging transformation stories. From age 15, Turner suffered from cystic acne that left his face covered in painful spots.

He switched to a vegan diet to combat his condition after medical treatment failed him. To everyone’s surprise, Turner’s acne vanished after he turned to a plant-based diet.

“I made the decision to give up dairy to see if it helped, and my skin started to improve immediately. I couldn’t believe it.”

After cutting out dairy from his diet, Turner noticed much less muscle inflammation after training and an overall improvement in his physical performance.

Lachance is an IFBB Pro Men’s Physique competitor in the Masters division. The bodybuilder turned vegan as an experiment but did not return to his old ways after seeing his progress.

“My coach asked me if I’d be down to experiment with vegan plans for my next competition. I always have an open mind to things,” explained Lachance. “I competed in my first show as a vegan and placed first.”

Lachance competed in eight bodybuilding shows as a non-vegan, but only struck gold when he turned to a plant-based diet.

“Veganism has transformed me mentally, physically, and spiritually and I’ve never been happier.”

Leah Marie is quickly climbing the ranks in the pro bodybuilding circuit. She won a Pro card at the Ms. Fitness Australia in 2022. Marie backed it up with her first win as a pro at the nationals, earning herself a qualification for the Miami and the Fitness Universe competition, where she again won her class and conquered the Figure Universe Champion throne.

The female bodybuilder has competed in the INBA and PNBA natural bodybuilding federations and has pro cards in three divisions — Figure, Figure Classic, and Physique.

Marie deals with hypermobility and has to deal with severe physical issues. She has undergone three surgeries for her condition and had to re-learn basics like walking, sitting, driving, and strength exercises.

The aspirational athlete has her eyes set on competing in the Natural Olympia and winning the crown.

Although the 14-day detox helped her recover from her surgery, she could no longer consume eggs or dairy as her skin reacted with rosacea after re-introducing eggs. On the other hand, she acquired jawline (hormonal) acne when she reintroduced cheese into her diet.

However, staying on the vegan diet paid dividends as she won her first bodybuilding competition, earning her a Pro Card with World Natural Body Building Federation (WNBF).

With over 1 million followers on Instagram, Taylor is the most popular vegan on this list. She is engaged to Nimai Delgado, making them one of the most #fitspo vegan couples on the internet.

Taylor also has a fitness content-focused Instagram page where she shares exercises, workouts, and her favorite vegan recipes with her followers.

Malik claims to be the first ever IFBB Pro bodybuilder to be vegan since birth. She started competing at the age of 19. She won the NPC Eastern USA Bodybuilding Championship in 2013 and captured her Pro card by winning the Team Universe show in 2014 in the Women’s Physique division.

“I never was curious or wanted to change my lifestyle as animals in my opinion were not meant to be eaten, animals have never been a food choice to me. What motivates me to continue being vegan is proving to the world that you can be strong and healthy without eating animals. I’m living proof!”

Anastasia Zinchenko has a PhD in biochemistry and is a competitive powerlifter. The UK native is also a sports and nutrition scientist.

Zinchenko turned vegan due to its health benefits but decided to stick to her new lifestyle after she discovered the negative impact of factory farming.

Foods to Eat on a Vegan Diet

Here are the foods that should be the mainstay of your vegan diet:

Foods to Avoid on a Vegan Diet

Stay away from these foods while on a vegan diet:

While it helps to know what you can and cannot eat on a diet plan, most people never start dieting until provided with a specific meal routine.

Given below is a 2,500-calorie high-protein diet plan for vegans who want to build muscle mass and lose weight:

Can vegan bodybuilders build as much muscle as meat eaters?

What are the main sources of protein for vegans?

Will switching to a vegan diet cause weight loss?

Weight loss is the result of staying in a calorie deficit, meaning expending more calories than you consume in a day. If you want to maintain your weight while switching to a vegan diet, make sure you’re sticking to your average daily caloric goal.

Many people are switching to a plant-based diet for its health benefits and doing their part to stop animal cruelty. For a long time, it was believed that you had to eat meat and consume other animal food products to build muscle and strength. However, this dogma is fast changing.

This article lists the 12 best vegan bodybuilders that have achieved a chiseled physique on a plant-based diet. Take the diet plan in this article for a spin if you want to try the vegan diet. Let us know how it goes. Best of luck!

According to most nutrition experts, the average man needs to eat around 2,000 to 2,500 calories per day. This should...