"The Mutant" is drowning out the noise and focused on bringing a next-level physique to 2022 Mr. Olympia. 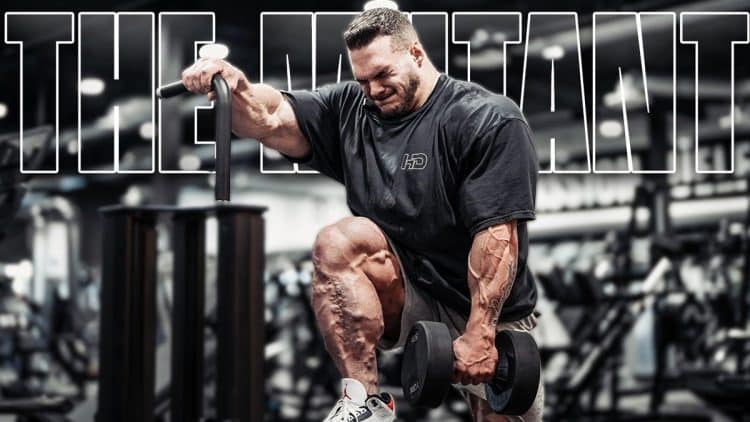 With the goal of becoming a Mr. Olympia champion, bodybuilder Nick Walker plans to showcase dramatic improvements when he steps on stage. In a recent YouTube video, Walker shared a brutal leg workout and posing session four weeks from the Olympia contest next month.

Fans and veterans of the sport have taken notice of Nick Walker. His freaky muscularity and v-taper led to an impressive season last year. He won the New York Pro and Arnold Classic titles back-to-back. In his first Olympia appearance, the 28-year-old secured a respectable fifth-place finish.

Walker’s latest off-season presented challenges, but his goal of winning several Arnold and Olympia titles hasn’t changed. At the end of September, Walker rejoined his coach Matt Jansen to dominate 2022 Olympia. Two weeks ago, Walker checked in at 279 pounds in the middle of a strenuous chest and biceps workout.

“The Mutant” traveled to Las Vegas recently and decided that’s where he will finish preparations. While enjoying Sin City, Walker met with retired 212 seven-time Olympia Flex Lewis. During their conversation, Walker said he felt a little lost after 2021 Olympia. Even though it affected his confidence throughout the year, Walker told Lewis with certainty that he will ‘1,000 percent’ become the next Mr. Olympia.

Before starting the workout, Walker reflected on the last few weeks of training.

“Every day has gotta count. It’s crazy to even think I only have four more leg [sessions] left. I started prep 20 weeks out and it’s now four weeks out. I’d say coming to Vegas at eight weeks, coming here was a game changer. I love Tampa right, but the show is here,” Nick Walker said. “Me getting back with Matt [Jansen] was definitely a game changer mentally.”

Walker started the workout with belt squat machine stiff leg deadlifts. He said this exercise is one of his favorites for building the hamstrings.

“This is my favorite exercise for hamstrings. It’s good for glute but for this in particular, I’m not coming all the way up to squeeze, I’m keeping all the tension in the hammy, but this is all tension throughout the whole range.”

At this stage of prep, Walker indicated that he is training high intensity with low volume. The hope is to create more detail when he’s posing on stage.

“I’m doing a lot more volume than I normally do. Training with low volume high intensity is good because we’re feeding if you know what I mean but I have the size that I think is needed. Just doing more sets. Moving a little faster, more drop sets. That’s going to create more detail for me for a better look on stage.”

One Leg Step up With Dumbbell

Walker moved on to his only dumbbell movement.

After completing a few sets, Walker went to the posing room and practiced

Walker suggested that a few of his poses have gotten a lot better. He believes his consistent ab training is one of the reasons for this.

“When I train my abs the better it [my control] gets. I’m going to be honest, people are like when you’re on stage you don’t move out of a pose, but I never practice. I just train abs every day.

You know how it is, when you dehydrate and you’re eating and no drinking, your stomach — it’s easier to hold it. But I think training them every day is what tremendously helped.”

Walker has been on the mind of many veterans and figureheads of bodybuilding. Given his rising popularity and star potential, Milos Sarcev believes the world wants to see Nick Walker in a showdown with two-time reigning Mr. Olympia Mamdouh ‘Big Ramy’ Elssbiay.

Retired IFBB Pro King Kamali laid out a plan of attack for Walker at 2022 Olympia earlier this week. Bottom line, Kamali believes the Olympia contest in December will be decided with conditioning. Moreover, he advised Walker to bring ‘Hadi Choopan-type conditioning’ if he’s to push Big Ramy on stage.

With over 32 Men’s Open contenders vying for the same Olympia title, Walker has ambitious goals for his second ever Olympia competition. Considering what he showed during the recent posing session, Walker intends to bring the wow factor next month.