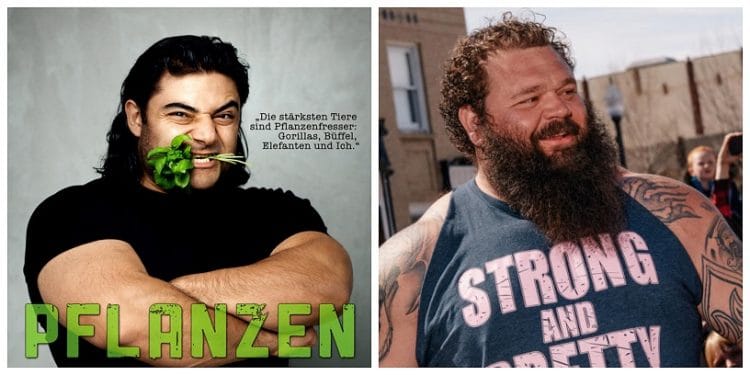 Can you be a competitive Strongman living off a plant-based diet alone? The short answer is yes.  A bit longer answer is;  well yes and no…it’s complicated.

About a week ago, competitive Strongman Robert Oberst was a guest at the modern day Oprah show for guys, The Joe Rogan Experience. In that episode, Joe and Robert touched on a couple of subjects over a 3 hour period and one of them was veganism in Strongman.

Robert is a perfect example of that wise old proverb. Joe Rogan, being ever so curious, tried poking into the subject a bit further by asking Robert about being a vegan and a Strongman.

After a brief pondering and genuine lack of information about the subject, a name popped up-Patrik Baboumian.

Patrik is a German Strongman and a former bodybuilder and powerlifter. He’s super strong, eats only plant-based foods and is basically all around poster boy for PETA and vegans worldwide. Ok..so case closed? You might be saying “Vegan strongman exists, end the fucking article”.

Not so fast, here’s where it gets complicated.  In the video clip where Joe and Robert bond over vegan dislike and animal product love, Robert points out that even though Patrik is strong…he’s not Word’s Strongest Man material or any top strongman competition material.

Which is true, Patrik never competed at WSM, Arnold Strongman Classic or any of the Giants live events. But what Patrik did do, is compete at several other (noticeably smaller) events and won them. Which Patrik himself decided to point out in his response video.

Now here’s the middle ground, they are both right. Patrik is right because unlike Robert, he has actually won Strongman competitions and has set several world records. Some even for the Guinness world book of records, all that as a vegan.

However, since his debut in Strongman, Robert has consistently competed at the highest of levels. He is a two time top 10 World’s Strongest Man placer, he has competed(and still competes) against the likes of Eddie Hall, Brian Shaw, Hafthor Bjornsson and many others at the biggest Strongman stages in the world.

Also, the Arnold Strongman Classic and World’s Strongest Man weights are standard competition weight for some of Patrick’s best lifts. Such as the yoke walk. In 2015 Patrik did a world record 560kg yoke walk in 28 seconds, well the 2014 Arnold Strongman competitors did a 556 kg yoke walk then moved on to an even heavier 639 kg yoke(bale) walk.

Patrik has more championships and records to his name, but Robert is competing against bigger and stronger guys while lifting heavier weights on a more regular basis.

Now back to the question of can you be a vegan and a strongman? Yes, you can. However, if you want to be a top 10/ top 5 Strongman athlete in the world or even a Strongman champion on an international level of the highest difficulty,  history suggests that you should be an omnivore. Strongman of old and strongman of today were all dairy product consumers on a massive scale.

Update: Check out What Vegan Strongman Patrik Baboumian Eats In A Day

Maybe, one day someone naturally strong comes along and smokes everyone while eating nothing but spinach and broccoli, but until that day comes….stick to meat if you want to be a Strongman.

Robert Oberst is one of the highest-level Strongman athletes that have ever competed. He has been active in the sport...

Arnold Schwarzenegger is a living legend with an incredible wealth of experience in bodybuilding and fitness. Recently, the Austrian superstar...