Good Vito, Vitaliy Ugolnikov shows a current update on his physique while he is working to bulk up, and he looks insane 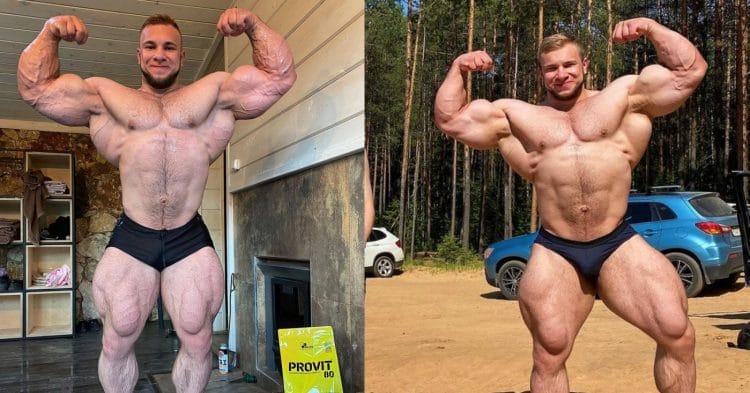 As it stands, Vitaliy Ugolnikov is already looking like a modern day mass monster. However he is still bulking up, and provided a recent update on his physique that showed off his gains during a mass building period, and it is awe inspiring.

Vitaliy “Good Vito” Ugolnikov has grown into a bit of a viral sensation over the years, since first emerging on the scene. This stemmed purely from the insane and massive physique that he has, all while being a 24-year old amateur.

Earlier this year, Vito announced his intent to bulk up even more, with a goal in mind to work towards a bodyweight of 140kg (308lb), while staying lean. He recently posted a physique update to his Instagram to show off his progress so far, and he looks absolutely jacked as he starts to approach his goal.

“Current form. A month and a half left of mass-loading, and straight to the dryers!” Good Vito wrote. “Get in shape for the fall season!”

The Future Is Bright For Vitaliy Ugolnikov

That is something that goes without saying, especially seeing the progress that Good Vito has made over the last 5 or so months. He does not reveal his bodyweight in this recent update, but it is clear that he has added a good amount of mass to his frame.

That being said, there is a difference between being gigantic and being stage ready. He says that after the last stretch of this bulking phase that he plans to dry out and get a bit more peeled, so it will be interesting to see the results of that.

Another noteworthy comment made by Vitaliy Ugolnikov, is that he suggests that he will be competing again in the fall. It will be worth paying attention to, in order to see what show he chooses to take part in next, and if it will be a pro qualifier.

It is worth noting that in recent months there have been some questions raised about the validity of Vito’s photographs. He has adamantly denied claims of photoshopping, and these recent updates in particular seem to be legit.

All in all, it seems like Vitaliy Ugolnikov is going to be worth paying attention to as the year comes to a close. He looks a lot bigger, so it is going to be fascinating to see how he looks when he dries out, and where he decides to compete next.