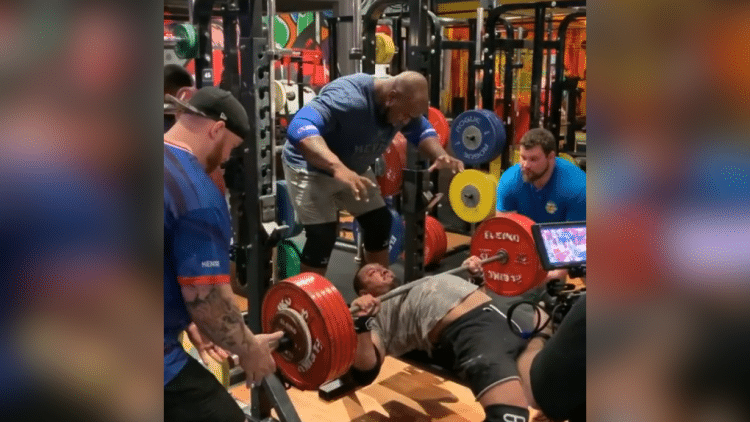 Larry Wheels, the personal record wrecking machine, is back at it again. This time, he hit an epic bench press, and he does it with style.

Wheels is known for his knack of constantly hitting new personal records, almost every time he goes to the gym. He is an incredibly strong phenom in powerlifting, and bodybuilding. On top of that, he really enjoys doing training with different people.

This time around, Wheels was training with several famed strongmen. Thor Bjornsson, and current World’s Strongest Man Martin Licis were among those were there. In a video uploaded to Instagram, Wheels explains that they were working hard, doing some squats. Following that, Larry decided to hit the bench, just to casually break a personal record, with a 630lb/286kg lift.

That was an impressive lift from Larry Wheels. Not only did he crush this, to get a new PR, but he did so as a paused bench. Therefore, not only did he have to lift, but he had to hold before doing so. Immediately after, he jumped right up, super hyped about his new record.

It is good to see Wheels getting back to his personal record-shattering. He had been dealing with a torn bicep and was only recently able to get back to work. Clearly, he is looking to make up for a lost time, as he has quickly gone back to getting bigger and better.

Larry Wheels is one of the most promising athletes in the world today. It has been good to see him heal up, so he can further impress us. This is something he is able to do at each step of the way, with more and more incredible feats.