Larry throws up some big weight while wearing his new "Team Personal Record" sleeves and wraps! 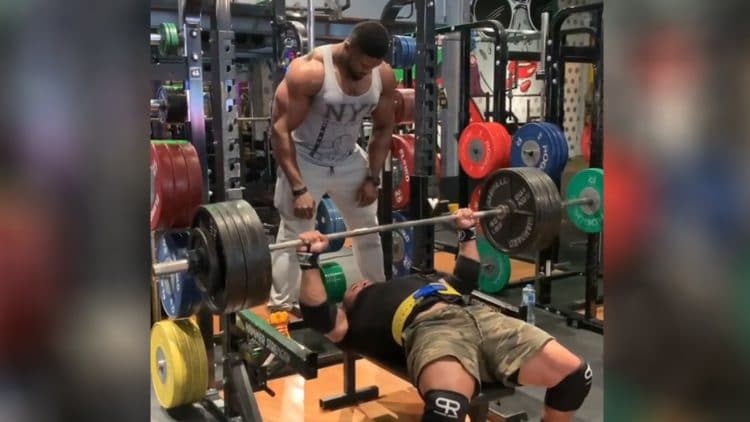 At this point we’re pretty accustomed to watching Larry Wheels move crazy weight whether he’s deadlifting, squatting, or throwing up big numbers on the bench press. But ever since his unfortunate bicep injury in June while preparing for the Giants Live Wembley Strongman event; Larry Wheels has not able to train like he usually does.

And thankfully, the 24-year-old phenom is recovering quite nicely from his injury.

Well, he recently posted a video where he hit a 545lb/247kg bench press for 5 reps. But this time, he was wearing his new “Team Personal Record” gear (elbow/knee sleeves and wrist wraps). So, not only did he bench this much weight but he did so in style!

“545lbs/247kg x5 in my @teampersonalrecord elbow/knee sleeves and wrist wraps! Yes I squatted before this”.


Now, Larry Wheels did hit 545lbs/247kg in late September for two reps which was his first heavy session since he was injured in June. So, doing it for five this time around shows his strength is improving big time. Not too mention, he already performed squats before jumping on the bench.

You can watch below…

But if you think that’s insane, Wheels pulled 745 lbs for 8 reps (no straps) in early September which was only a few months after he tore his left bicep.

It’s safe to say Larry Wheels is back and he’ll likely be training to compete in Strongman competition where he left off, before his bicep tear. But Wheels has also shown an interest in bodybuilding having competed previously and he even trained with Brandon Curry a few weeks before the 2019 Olympia back in August.

So, who knows exactly what the near future will bring for Larry Wheels and although we haven’t seen as much from him, you can expect to see more updates on his training progress and competition plans.

And hopefully, the alleged abuse situation clears up too as this was an unfortunate story which surfaced in July but we’ll be sure to fill you in on any updates from Larry Wheels.