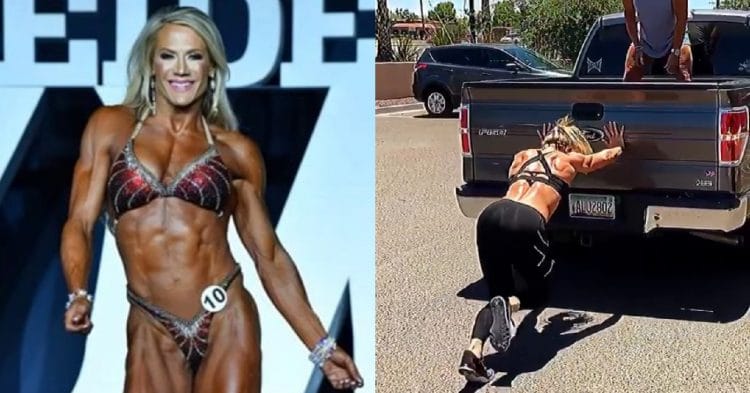 Two-time Fitness Olympia winner Whitney Jones is hopeful that she will make get her third straight win on the big stage this year. In her prep to do so, she decided to employ some pretty unique training methods.

Few stories in Bodybuilding are as inspirational as that of Whitney’s. A few years back, she suffered a neck injury that kept her on the shelf for a year, and quite possibly could have spelled the end of her career. However she came back with a vengeance, going on to win the Fitness Olympia in the same year that she returned to competition. Then, as if this were not impressive enough, she followed this up with a second Fitness Olympia win, solidifying herself among the best athletes in the world.

Whitney Jones is hoping to get her third straight Fitness Olympia title at the 2020 Mr. Olympia, in about three month’s time. In the efforts to prepare for this massive challenge, she has decided to use some fairly unorthodox training techniques. One such example of this was posted to her Instagram recently, and sees the two-time champ pushing a truck that is much, much bigger than her, around a parking lot with relative ease.

“Truckin’ Tuesday! 💪🏼 Change up your workouts….push a Truck!”

Some people truly thrive from doing unique training things like this, from time to time. It helps keep some athletes motivated, as it provides a reprieve from the normal types of training done within the confines of a gym. Keeping things fresh in training is always a good way to help find entertaining ways to get a good workout in, whether it is through pushing trucks or other unorthodox training methods.

However do not get it twisted, Whitney Jones does plenty of hard work inside the gym too. Although even then sometimes, she likes to push herself with more of a CrossFit type of workout sometimes. This was shown big time with another update a few days later, that sees her doing an intense full body workout, consisting of everything from walking up walls while balancing on her hands on a box, to jumping jacks with resistance bands around her legs and a barbell in her hands.

Regardless if whether or not she is able to win a third Fitness Olympia title, Whitney Jones is a tremendous athlete. She has already accomplished more than what many people were expecting. Yet she seems determined to give it her all this year, in hopes of getting that third straight win.