We rewind the clock to the Fitness Olympia division's debut in 1995 and honor the 11 women who have won the title since. 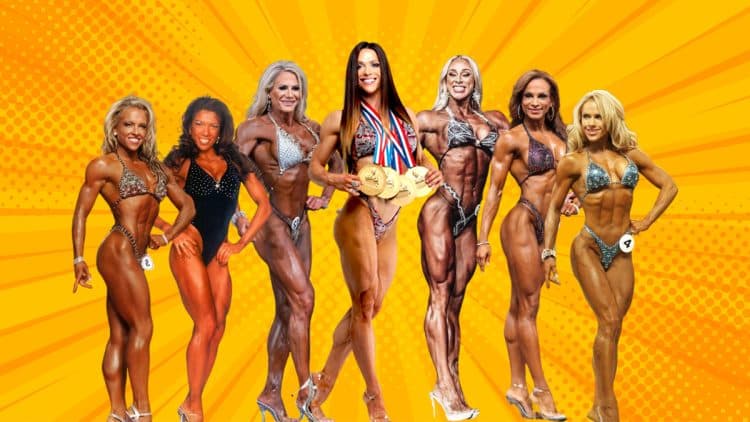 For 15 years between 1980 and 1994, Ms. Olympia was the only division pro female bodybuilders could compete in at the prestigious Olympia Weekend.

The Fitness division became the second women’s division to be introduced by the International Federation of Bodybuilding and Fitness (IFBB) in Joe Weider’s Olympia Fitness and Performance Weekend and debuted in 1995. It paved the way for more female competitors to participate in the Olympia Weekend and exhibit their physique, strength, and talent.

The Fitness division comprises a posing round and a unique fitness routine that shows off the competitor’s talents in gymnastics, strength, and stage presence. It is one of the earliest divisions to host not only bodybuilders, but also former gymnasts, dancers, and cheerleaders.

Fitness athletes focus on crafting an overall athletic physique and are not generally as muscular as traditional bodybuilders. While other women’s divisions, including Figure and Physique, focus entirely on a competitor’s physique, the Fitness division takes things a step forward. It requires the competitors to deliver a strong performance as well.

Mia Finnegan created history by becoming the first Fitness Olympia champion. The division got off to a competitive start that has grown with each passing year. In the 28 Fitness Olympia shows so far, 11 champs have been crowned. Fitness icon Adela Garcia stands as the winningest athlete with eight Fitness Olympia trophies under her belt.

This article goes over the history of the Figure Olympia contest, the notable moments, rivalries, and the 11 champions who have held the throne.

Given below are all the Fitness Olympia winners:

The first five years of the contest were some of the most thrilling. Each year saw a new champion. Mia Finnegan won the first Fitness Olympia in 1995. Saryn Muldrow, who placed third behind Carol Semple and winner Finnegan, took home the top prize in 1996.

After coming close to winning twice, Semple secured the Fitness Olympia title in 1997. International fitness icon Monica Brant won the 1998 Fitness Olympia, the only edition held outside the US. In 1999, Mary Yockey closed out the century as the final Fitness Olympia winner of the 90s.

The competition moved locations every year until finding a home in Las Vegas in 1999.

The division garnered a lot of interest from fans and promoters alike. It received positive feedback and stood out at the Olympia Weekend.

Susan Curry won her maiden Fitness Olympia show in 2000. She faced intense competition from fellow standouts Kelly Ryan and Jennifer Worth, who placed second and third, respectively. The trio’s rivalry continued the following year, but Curry became the first champion to defend the title by winning the 2001 Fitness Olympia.

After taking the podium in 2000 and 2001, Ryan and Worth became a serious threat to Curry’s throne at the 2002 Fitness Olympia. Nonetheless, history repeated itself. Curry got her third consecutive win, with Ryan and Worth finishing in the top three. Curry won her fourth and final Fitness Olympia show in 2003.

Curry retired from competitive bodybuilding after winning her fourth Olympia trophy in 2003.

Adela Garcia had been in the title contention since her first Olympia appearance in 2000, where she placed fifth. She proved herself as a consistent performer who retained her top-five place for the next three editions.

With the Figure Olympia throne vacant after Curry’s retirement, Garcia finally broke through to claim her first title at the 2004 Fitness Olympia.

The following season would see Garcia lose her title to rival Jen Hendershott. Garcia placed third on the podium behind runner-up Kim Klein in 2005. She returned with vengeance in 2006 and became the first Fitness Olympia champion to reclaim the title after losing it. She extended her reign the next year with a win at the 2007 Figure Olympia.

Although Garcia was the reigning champion, she did not return to defend her title at Olympia 2008. This made way for her longtime foe Hendershott to get her second Olympia trophy. Once again, Garcia had the challenge to dethrone Hendershott in what was turning into one of the most exciting rivalries in the category’s history.

Garcia left no stone unturned in her preparations for the 2009 Olympia. She brought an improved package with impressive conditioning and a memorable performance routine to reclaim the title a historic second time.

Garcia went on a rampage and won the title four more times, making it five times in a row. Besides Klein and Hendershott, Garcia also warded off the next generation of Fitness athletes to become the most decorated champion in the Fitness Olympia history with eight trophies.

Having been a top contender for many seasons, Hendershott won her first Figure Olympia in 2005 by taking the throne from Garcia. She also defeated fellow standout Kim Klein, who placed runner-up ahead of Garcia.

Hendershott fell short of Garcia in 2006 and dropped down to the third spot behind Klein. In 2007, it was evident that the competition for the Figure division was largely between these three athletes as they got the exact same placings from last year, with Garcia winning the show and Hendershott coming in third behind runner-up Klein. It marked the third consecutive year when the trio finished on the podium.

Garcia did not return to defend her title in 2008, and Hendershott capitalized on the opportunity by winning her second Fitness Olympia, beating seasoned veteran Tracey Greenwood and Kim Scheideler. She became the second woman to win the Fitness Olympia title after losing it.

Following second-place finishes in her previous two showings, Oksana Grishina returned looking better than ever to get her maiden Fitness Olympia trophy in 2014.

Grishina is regarded as one of the greatest Fitness Olympia athletes of all time. Her innovative fitness routines raised the bar higher each time she stepped on stage and set a new standard for budding prospects.

Tanji Johnson and Regiane Da Silva served as Grishina’s main opponents during her reign. Johnson battled it out with the Fitness Olympia champion in 2015 and 2016 but could not snatch the title. Grishina won both years and got her final victory at the 2017 Fitness Olympia. She announced her retirement after winning four Olympia titles.

Grishina made a comeback in 2020 and 2021 in her quest for a fifth Fitness Olympia title. However, she narrowly missed both times, placing second and third, respectively.

Whitney Jones took to the Olympia stage for the first time in 2013, where she finished 13th. Her next two showings would see her stay on the periphery of the top 10, with many overlooking her chances for the title.

In 2017, Jones suffered a neck injury that forced her to skip the Olympia. There were doubts about whether she would be a real contender in her return next year. To everyone’s surprise, Jones won the 2018 Fitness Olympia with an elegant performance. She held on to the title at the 2019 Fitness Olympia.

The world would change a few months after the 2019 Olympia due to the COVID-19 pandemic. Orlando, FL, became the new home of the Olympia Weekend for the next two years. Jones lost the championship to Missy Truscott at the 2020 Olympia and finished third behind former champion Grishina.

Whitney Jones came back with a significantly improved package to win the 2021 Fitness Olympia. She made history by becoming the third woman in the division to win both the physique and routine rounds. She also became the third competitor to reclaim the Fitness Olympia title.

Missy Truscott is the first Canadian to win the Fitness Olympia title. Grishina returned to the Olympia stage in 2020 after stepping away from the competition with four titles under her belt three years ago in 2017.

Although Grishina came back with a strong physique, Truscott stole the show at the 2020 Olympia. She took the title from Whitney Jones, who finished third behind Grishina.

The 2022 Fitness Olympia was full of surprises. Owing to an undisclosed health scare, the two-time and defending Fitness O champ Whitney Jones pulled back her name a day before the show. Furthermore, the four-time Fitness Olympia champion Oksana Grishina withdrew from the 2022 O on the day of the show due to a leg injury. This made Truscott a frontrunner for the 2022 Olympia thone.

Truscott sealed the deal with her improved physique and a standout fitness routine, wearing a shark costume and elaborate shark facial prosthetics. Truscott’s win at the 2022 O made her the fourth Fitness O champ to win back her title after losing it.

The 58th edition of Joe Weider's Olympia Fitness & Performance Weekend is underway in Las Vegas, NV. However, the Fitness...

The 2022 Olympia contest is currently taking place in Las Vegas, Nevada, from December 15-18, inside the Zappos Theater, located...