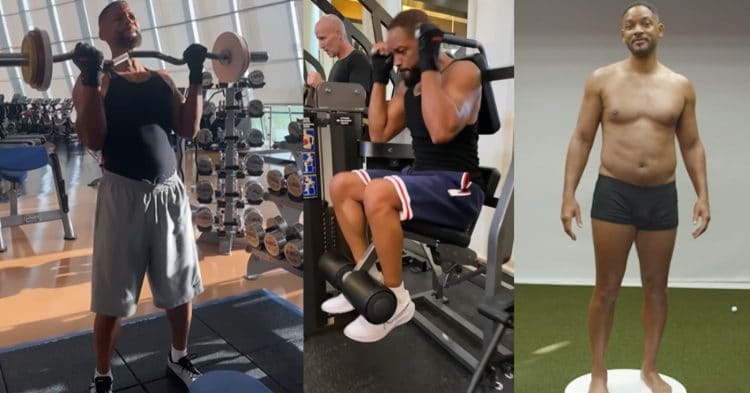 Will Smith Best Shape Of Life

Hollywood icon Will Smith has made significant gains in his weight loss journey. Back in May, Smith revealed that he was tired of the weight gained during the pandemic and embarked on a very public weight loss journey. The Bad Boys star’s recent Instagram post shows just how far he has come in his quest.

Will Smith’s Instagram post opened with a text message ‘Sundays aren’t an excuse to rest’ and contained a montage of his workout videos. The 53-year-old actor did various exercises including sprinting, combat sports training, pull-ups, dips, crunches, and weight training in the video. All things considered, Will Smith is once again looking like the guy who acted in Hancock and I am Legend. The caption to the post read:

‘And to think Sundays used to be for muffins.’

The caption refers to the Instagram post that Smith shared in May, which started it all. Smith posted a shirtless photo of him and admitted to being in the worst shape of his life. Will Smith attributed his weight gain to binge eating during the pandemic and most notably, to the midnight muffins. While adding that he wanted to feel better, the 53-year-old actor then announced that he was teaming up with YouTube to track his weight loss journey to get in the best shape of his life.

‘This is the body that carried me through an entire pandemic and countless days grazing thru the pantry. I love this body, but I wanna FEEL better. No more midnight muffins…this is it! Imma get in the BEST SHAPE OF MY LIFE!!!!! Teaming up with @YouTube to get my health & wellness back on track. Hope it works!’ Will Smith wrote in the caption

Smith’s initiative inadvertently started a movement that fondly became known as #BigWillieChallenge and #DadBodChallenge on social media. Several celebrities posted similar photos and started their journey towards a healthier life in the days that followed.

Will Smith has kept his fans updated with his weight loss journey over the last five months. The Hollywood icon has routinely posted his workout videos on Instagram and YouTube through the entirety of this period.

Smith kicked off his new routine immediately after announcing his plans in May. Those who have once been in impeccable shape usually have a hard time going back to the basics, Will Smith included.

Smith was initially unhappy with his trainer’s methods to get his body accustomed to an arduous routine. Smith’s ego simply did not allow him to do exercise like barbell squat without weight or using some 15lbs dumbbells for shoulder press. However, the 53-year-old eventually agreed to take it easy in the initial stages of his body transformation.

Will Smith did not allow his progress to slow down in the months that followed and has kept himself motivated to get in the best physical shape. Smith’s journey is special because along with himself, the Hollywood icon has inspired a large number of other celebrities and people around the world to walk on the same path as him.