Big Ramy was treated like a hero in his return to Egypt after defending his title at the 2021 Mr. Olympia 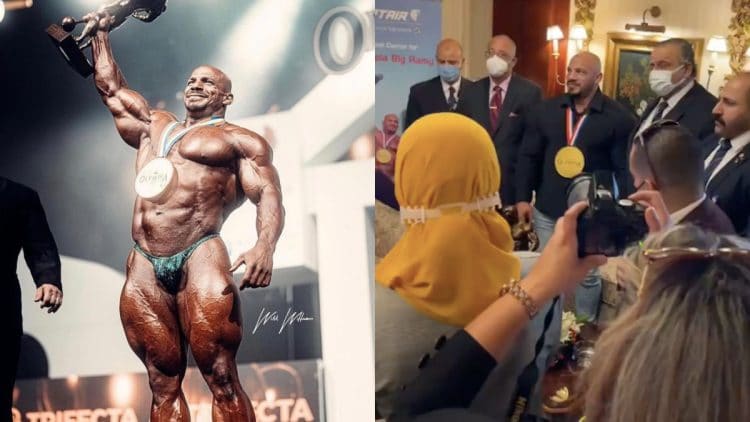 Bodybuilding is a huge sport in Egypt, and as a result Big Ramy is something of a national hero. This was made more evident by the welcome he was given when returning home after winning the 2021 Mr. Olympia.

When Ramy won the Olympia title in 2020, he was greeted by an outpouring of support from his fellow Egyptians. Rightfully so too, consider how big of a sport bodybuilding is in that region of the world, and how good he looked to win the title.

Things were no different this year, after he was able to defend his title and win the Olympia once more, after being away from his home for several weeks. He finally returned home and, as posts to his Instagram show, he was once again greeted like the national hero that he seems to be, with the EgyptAir crew once again setting up balloons to welcome home their champion.

This was not the end of the festivities either, as Ramy was then greeted by the pilots and staff from the air liner, who asked him to hang out for a few minutes and take photos. They even had a cake made with him on it, showing off his legendary massive physique, while balloons draped the background with his name on them.

On top of that, once he was off the plane, Ramy was escorted through the airport, while being swarmed with crowds. He was then taken into a room where he was celebrated for the job well done when he won the Olympia.

The festivities did not stop after he got out of the airport either, as he was bombarded by fans from the moment he left. He was then filmed riding through the city, where countless people cheered him on and celebrated the exciting contest that left him victorious.

Obviously Big Ramy is a fan favorite, especially in his hometown. However there is some level of controversy in the win, with some people questioning whether or not he was deserving of the victory.

Namely, critics have pointed to the conditioning that third place scorer Hadi Choopan brought to the stage, as well as the complete physique he had, saying that he was robbed. This has led to questions about how important conditioning is, or if size is the main attribute judges took into consideration.

Nevertheless, Ramy was victorious and looked impressive, even if it was not as good as his 2020 package. As long as he does not come in off one year, he will likely hold the title for a while.