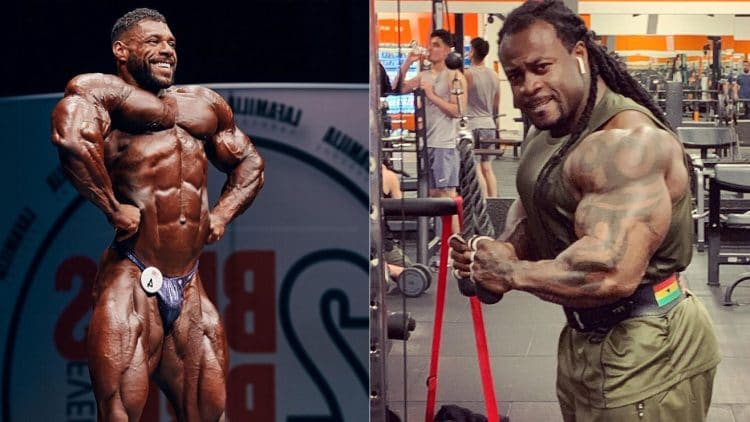 Bodybuilding star Nathan De Asha is not shy when it comes to getting involved in drama. He recently competed against Hadi Choopan at the Vancouver Pro, where the”Persian Wolf” won the competition in a open bodybuilding division, he never competes in.

Hadi Choopan is normally a 212 competitor but he stepped on stage with the bigger guys in the Open and dominated. Well, De Asha wasn’t too happy about this and it’s really no surprise.

After the Vancouver Pro, De Asha posted a picture of him on social media to prove to everyone he was in shape. And he wrote…

“Boooooom all muscle baby!! Leave this here for the ones who say I wasn’t in shape. Begging like n comments.”

But someone commented, “But Hadi bit yoh” (But Hadi beat you).

De Asha responded with… “The oil beat me. Fake muscle lol“. And this is when William Bonac had to step in. He posted a picture of him and the legend Dexter Jackson with the caption where he obliterated Nathan De Asha’s ego…

“With my big brother @mrolympia08 i think its safe 2 say he is a living legend, & a inspiration to millions of us. Always working in silent never brag about him beating us joung dudes on stage 😈 .
unlike some of these New comers talking shit all day about who they never beat but think they can beat. Some trying 2 beat a 212 class in his open class debut. And yet failed big time wasn’t even close!!! Talk less work harder!“

Well, it was clear that Hadi Choopan was not oiled up as De Asha says since his conditioning was excellent and there were no signs of Synthol use even if he did use a little bit.

But Bonac’s comments were enough to serve Nathan De Asha a taste of his own medicine after getting beaten convincingly by Hadi Choopan in the Open class.

Nathan De Asha recently had a back and forth with Luke Sandoe and as the Olympia inches closer, we might expect there to be some more trash talking going on between the Pros. But, that’s all a part of the game, however, this instance may have been uncalled for.

Roelly Winklaar Looking Inhuman Weeks Out From 2019 Olympia But Can He Win This Year?