Mila De’brito from UK has made $13,522 by selling her breast milk to bodybuilders. 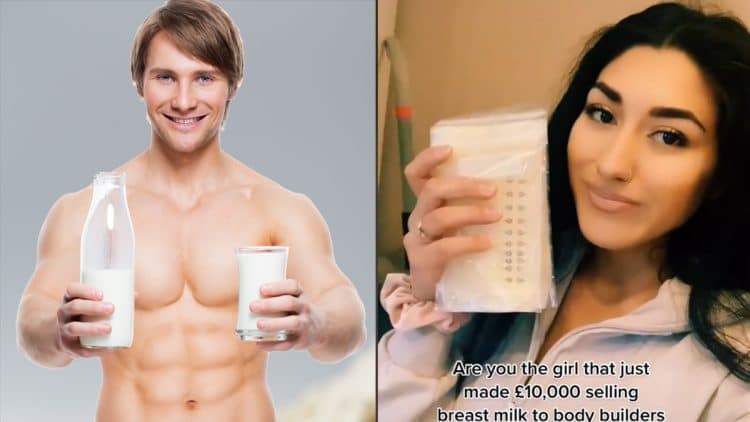 The late, great Rich Piana often said “Whatever it takes!”, well it looks like modern-day bodybuilders and fitness enthusiasts are doing just that.

Mila De’brito, a British mom of two, recently made a TikTok video in which she’s flexing with a stack of cash with the caption reading that she made it from selling her breast milk to bodybuilders. To say the video went viral, would be an understatement.

As of this writing, the video has 216.000 views, around 6000 likes, and about 320 comments. The video itself isn’t anything spectacular but the topic is funny and actually highly debate in the science community. I actually know a guy who did this when his wife was breastfeeding. The wife had a “leftover” stash in the fridge and like a true bro scientist he chugged it down. From what I recall, the argument basically boiled down to “if it’s good for the kid, it’ll be good for me” and “free protein”.

The actual science of breast milk consumption in human adults( or even regular cow milk for that matter) is a disputed matter and the interpretation of the results are pretty much whatever you’re biased towards in this subject.  General consensus is that breast milk should only be consumed by toddlers and that it has next to no effect on adults. However, anecdotal evidence and some lesser scientific studies point out that breast milk just might be a-okay for you.

Insider.com did an article two years ago regarding a Netflix show called “(Un)well” in which adults consumed breast milk and cited that it can kill cancer cells and grow muscle mass. One of their subjects was J.J. Ritenour who swears that breast milk is the secret youth potion. Here’s an interesting quote from the article:

After measuring progress before and after Ritenour started supplementing, his trainer agreed. “I would say the vitamins from the breastmilk have really helped him,” the trainer said on “(Un)Well.” (…..) The substance adapts to a baby’s needs as he or she develops, taking on some of the flavors of the mom’s diet and boosting immunity , but “it’s not particularly valuable for athletes,” Bruce German, a professor of food and chemistry at the University of California-Davis, said on the show. In fact, he said, the nutritional profile of human milk is “rather poor” for athletes: low in protein, high in saturated fat, and very high in lactose, a sugar many people can’t digest.

Be that as it may, Mila De’brito, the TikToker “milk-money mom” is selling her breast milk and has made serious cash off it. The comment section of the said TikTok video quickly turned into an involuntary pyramid scheme pitch where women were seeing dollars signs while watching the video. Some of the comments are as follows;

And there is me who donated 15L, the money I could have made

What! how?!? I need to know as I’m breastfeeding, Omg I can’t get enough in a bottle for a feed never mind sell it, jealous

The more I read about this subject, the more I’m certain, that in this case, men were buying it for sexual gratification purposes. Guys find a hot young-looking woman on social media and immediately start spamming her with messages about breast milk and offering her money until she finally cracked and said to herself “why the hell not, I’m giving it for free here“.

In some bizarre way, it almost reminds me of the time when Connor Murphy started advocating the consumption of human semen as a natural source of protein. People will do anything just to get that extra edge, I guess.