Big Z and Rauno Heinla had the same number of points, so a tie-breaker decided the winner at the 2022 Official Strongman Games. 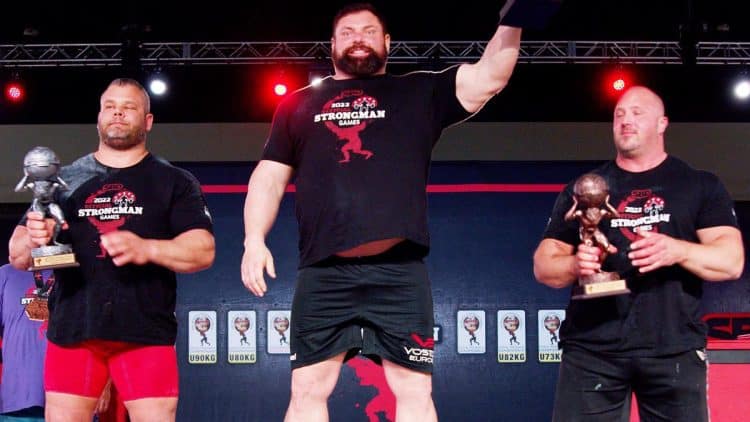 The 2022 Official Strongman Games took place on November 12-13 in Daytona Beach, Florida, among the highlights was the crowning of the Strongest Masters athlete of the year. One of the greatest Strongman athletes of all time, Zydrunas “Big Z” Savickas, added yet another trophy to his cabinet. This marks the third time that the Lithuanian has claimed the Masters 40+ World’s Strongest Man title.

Having won 4x World’s Strongest Man titles during his younger years, Žydrūnas Savickas has continued his domination in the Masters’ division. This year was the hardest for him yet, as Rauno Heinla competed for the first time, having turned 40-years-old earlier this year. The battle between Savickas and Heinla came down to the last event, but despite the tie on points, Big Z won the title because of a tie-break.

Big Z opened the competition up with a very solid performance in event one (Viking Press), as both he and Rauno Heinla completed nine repetitions with 147.5 kilograms (325 pounds) and shared a third place finish. Setting a trend on the second event (Farmer’s Walk) already, Big Z grabbed another third place finish as he carried 150 kilograms (330 pounds) in each hand in 18.22 seconds.

Knowing that consistency would bring him the win, Zydrunas Savickas managed to finish third in event three (Axle Deadlift) as well. So, his 9 reps with 299.5 kilograms (330 pounds) brought him an early lead. In addition, Big Z somehow got yet another third place finish in event four (Sandbag to Shoulder), having lifted three out of the four bags.

Although Zydrunas Savickas was hoping to continue with the top 3 placings on day two, his performance in event five (900-lb / 408-kg Car Walk) was just enough for a fifth-place finish. That wasn’t the end of his problems, as his fourth-place finish in the sixth event (Circus Dumbbell) meant that Rauno Heinla’s event win would get him the lead going into the final event.

Zydrunas Savickas had to win the seventh event (Atlas Stones) and hope for the best. Luckily for him, everything lined up perfectly, as Heinla’s fourth-place finish on the Atlas Stones meant that they would be tied on points overall. Due to the traditional tie-breakers, Big Z won the championship since he placed better on the final event.

Zydrunas Savickas has so far taken part in a mind-blowing 170 International and National competitions. In addition, only one victory separates him from that 100 mark, as he has won 99 shows. Those include numerous major titles, but his four wins at the World’s Strongest Man contest stand out the most.