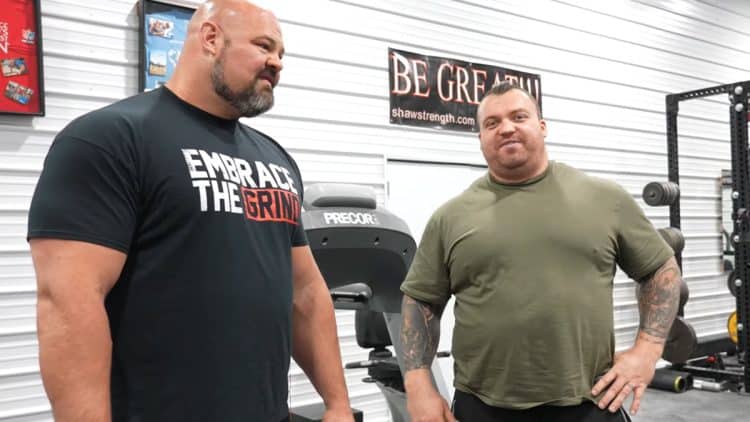 The humor and strength of Brian Shaw and Eddie Hall are well-known among Strongman fans. Together, the two have competed in many competitions and even appeared on a TV show together. It has been a while since the two of them have been able to spend time together in a relatively relaxed setting. Shaw and Hall have now collaborated once again, and their interactions have been posted on YouTube.

Eddie Hall traveled all the way from the UK to the USA in order to visit Brian Shaw and train with him. So, the pair met at Shaw’s new home gym and completed a taxing shoulder workout. While the guys were mostly joking around with each other, they did push themselves through a series of exercises, which left them both in puddles of sweat.

Eddie Hall and Brian Shaw first had a short conversation on Brian’s property, where Hall was amazed by his gym, business room, as well as view.

The pair started their shoulder session with a seated dumbbell press. However, these were no ordinary dumbbells, as Shaw and Hall used the Thompson Fatbells, which look like cannon balls. The initial weight was 53 pounds, but it quickly increased to 150 pounds in each hand, which they performed ten repetitions with. In total, Hall and Shaw performed five sets.

“Gotta say. Never touched them (Fatbells) before. We did five sets, but I feel like we did ten sets. It’s that much harder to stabilize,” said Hall.

In between the dumbbell sets, Eddie Hall started talking about moving in next to Brian, just so they can see each other more often. Judging by his response, Shaw was not too fond of this idea.

“I don’t really want that… All of the things that you are thinking, you should stop,” Shaw said jokingly.

The next exercise for Shaw and Hall was the seated machine shoulder press. Despite starting off with one 45-pound plate on each side, they added another plate with each following set. They ended with a top set of 10 reps and 450 pounds in total.

Having exhausted the pressing strength they had, Shaw and Hall moved on to a rear shoulder cable crossover. However, they made it a superset with unilateral dumbbell lateral raises. When Brian came to the final set, his competitive nature kicked in, and he just set a goal to go one rep further than Eddie Hall. So, Hall stopped at 12 reps, while Shaw performed 13 of them.

“Me and Brian have been good pals for quite a long time now and we’ve never met up outside of work,” Hall explained.

“It’s good. We are going to have fun,” Shaw answered.

Brian Shaw and Eddie Hall are likely to star in the second season of “Strongest Man In History”, as per their colleague, Robert Oberst. Nothing is official yet, but the show proved to be a major success in season one, largely due to the chemistry between the four Strongman athletes.

Shaw and Hall have both won the WSM, but contrary to Eddie’s singular title, Brian has stood on top of the podium four times. Hall has since retired from professional Strongman, while Shaw will not be competing until 2023.