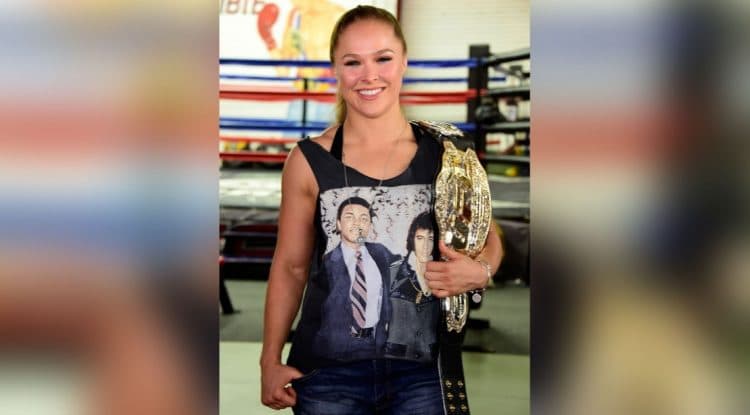 Ronda Rousey confirmed her engagement to UFC fighter Travis Browne, her boyfriend of two years, on her Instagram on Saturday, posting a photoshopped image of her in a black suit carrying Browne in a white wedding gown.

TMZ first reported the engagement on Thursday. Browne apparently asked the mixed martial artist to marry him with a large diamond ring under a New Zealand waterfall last week.

“It felt like the right place to do it,” Browne told TMZ of the decision where to pop the question.

Rousey, 30, is reportedly keeping an “open mind” about the date of the wedding but hopes her nuptials will occur soon.

Browne, 33, confirmed their relationship in October 2015 on the talk show The MMA Hour, saying, “She’s my woman and I am her man.”

In December, Amanda Nunes defeated Rousey in just 48 seconds to retain the bantamweight title. Nunes, 28, shared a poorly photoshopped image of herself holding her championship belt while pushing an upset Rousey — as a baby — in a stroller.

Rousey used the same upset face for her engagement post as Nunes selected for her social media spar.

Cris Cyborg: A Fight With Ronda Rousey ‘Would Be Better in WWE Only’

Current featherweight champion Cris "Cyborg" Justino said that she'd fight Ronda Rousey, but not in the UFC. Cris Cyborg is...

WATCH: Cris Cyborg Chases Training Partner Out Of The Gym, Kicks The S—t Out of Him

Retirement is never a sure thing in sports, especially in mixed martial arts. If Dana White was a betting man,...

Rousey's mixed martial arts career is most likely over, UFC president Dana White said Monday on a podcast with Jim...