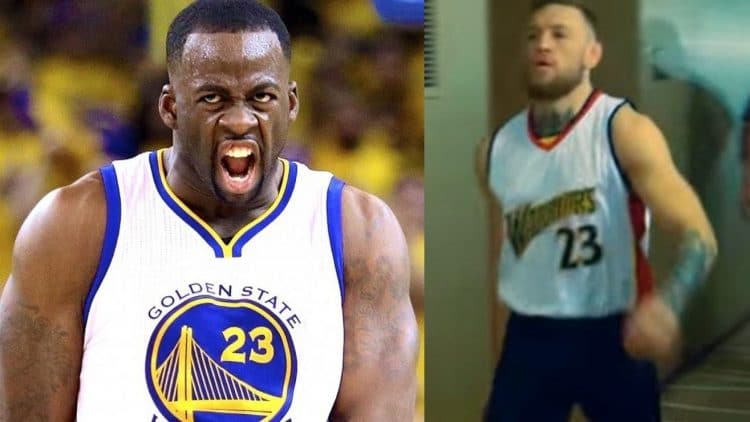 Conor McGregor and Floyd Mayweather Jr. are showing nearly no limits in their effort to promote their upcoming fight.

McGregor has repeatedly stoked the flames of racism, making himself a villain to some and a hero to others – but, more importantly, drawing attention from both sides. He also wore a No. 23 Warriors jersey.

Hey, I wear No. 23 for the Warriors, Draymond Green apparently thought to himself. So, Green posted on Instagram to inform everyone he was supporting Mayweather:

The Golden State Warriors' Draymond Green and UFC 155lbs champion Conor McGregor had a back and forth on Instagram. https://t.co/qeAdJRM8Kb pic.twitter.com/MiK5eaY7zI

C.J. Watson previously wore No. 23 for the Warriors, and this isn’t the first time McGregor has referenced the guard in relation to Mayweather:

Why does McGregor keep bring up Watson?

The altercation happened when Mayweather returned to Harris’ property at 5 a.m. on September 9. Police had already been summoned following a verbal dispute hours earlier, but Mayweather came back. Harris says she was asleep on the living room couch when she woke up to Mayweather, holding her cell phone, yelling at her about text messages from NBA guard C.J. Watson.

Mayweather and Harris were no longer together; the boxer had by then installed Jackson in his home and as his main love interest. But, according to Harris, it was not acceptable to Mayweather for her to see other men while living in a house he owned.

“Are you having sex with C.J.?” Mayweather yelled at Harris, according to the arrest report.
“Yes, that is who I am seeing now,” she replied.

Mayweather then grabbed her by the hair and punched her in the back of the head “with a closed fist several times,” according to the report. He then pulled her off the couch by her hair and twisted her left arm.

“All I heard is, ‘Who is C.J. Watson, C.J. Watson the basketball player?’ ” Harris says. “From there it was just … bad. I was powerless. He was holding me down. I couldn’t fight back. The kids were screaming and crying, ‘You’re hurting my Mom.’ ”

At one point, Mayweather yelled, “I’m going to kill you and the man you are messing around with,” Harris told police. “I’m going to have you both disappear.”

According to the arrest report, when Harris screamed for her children to call for help, Mayweather turned to them and warned he would “beat their ass if they left the house and called police.”

I don’t think Green realized the context. He responded to McGregor in the comments by hyping his superiority to Watson and talking about boxing:

Knowingly or not, making light of domestic violence is on brand for the NBA.

WATCH: The 5 Exercise Swaps You NEED to Make (RIGHT NOW!!)