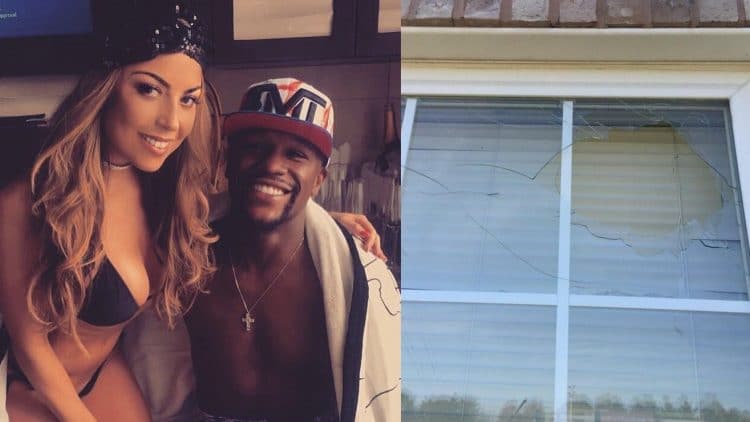 Floyd Mayweather’s British girlfriend was left in floods of tears after thug fans of rival Conor McGregor hurled a brick through her window – wrapped in the message “f*** the Mayweathers”.

TOWIE star Abi Clarke, 25, has been subjected to a torrent of abuse after her secret relationship with Mayweather was revealed last week.

Ms Clarke was also confronted by three thugs in the street who launched a torrent of abuse, shouting: “You plastic slag… You’re loose. Mayweather’s gonna die”, the The Daily Star reports.

The reality TV babe and multimillionaire Mayweather, 40, have been secretly dating for months, it emerged last week. But the news sparked a “real-life nightmare for Abi”, according to a source close to the star.

Early on Thursday morning, a group of yobs threw a brick through the window of her Essex home with McGregor’s taunting phrase: “F*** the Mayweathers” attached in a note.

“The stuff she has had to deal with has been tough to take.

She is genuinely worried about her safety. There are concerns that the worst could happen if things get out of control.”

Neighbours reportedly rushed to help Ms Clarke, fearing she had been hurt in the attack on her Essex property. The yobs then fled the scene, leaving her in floods of tears.

“It was horrific. Abi was understandably shaken by what happened.

When neighbours went round to offer support she was having a panic attack.

It had all come out of nowhere and she didn’t know what to make of it. She was sobbing and shaking.”

She has since been the victim of vile taunting in the streets and online. One source told The Star: “People have been shouting at her. She’s also had nasty messages on Instagram.”

Ms Clarke did not call the police after previously being told her life in the public means nothing can be done, they added.

But she still hopes to publicly support her boyfriend when he clashes with UFC lightweight champ McGregor, 29, on August 26.

Floyd and Abi met last year while she was on holiday in Vegas and the pair went on to have a string of dates.

Now she regularly flies out to the US to spend time with him and has even been introduced to his family.

“They’ve got to know each other really well and like each other a lot. But the events of this week haven’t been easy,” another source said.

“She knows if she’s going to continue seeing him she will have to consider her security situation and may have to move for a while.”

Learn how Joe Rogan stays so ripped with his diet and workout routine! Someone who is too uptight about their...