Conor McGregor, Paulie Malignaggi Come Face To Face And Get Into Heated Confrontation 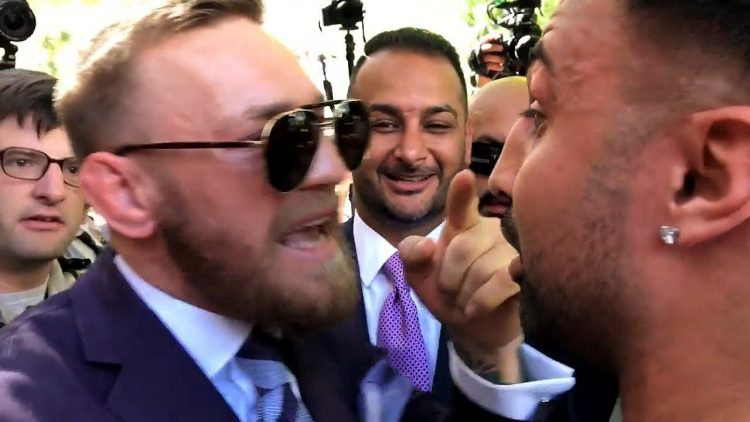 The biggest show on the planet officially rolled into Las Vegas as Conor McGregor, and Floyd Mayweather made their grand entrances to Sin City.

Things got real heated between Conor McGregor and Paulie Malignaggi at a fight media event in Vegas – with Paulie getting right in Conor’s face, teasing him about his balls.

Paulie kept repeating to Conor, “Did you bring your balls?”

Conor reached out and put his hand on Paulie’s shoulder and said,

“You got your ass whooped. Get over it.”

Paulie is furious with Conor for releasing a sparring video from his training camp which showed him knocking Paulie down in the ring.

Malignaggi has expectedly bombarded with questions by reporters afterward. According to him, he was talking to McGregor’s manager Audie Attar about the videos, to which Attar responded by saying that Malignaggi “talked out of his contract.”

“All words came out after you put up pictures,” Malignaggi explained. “So when you posted pictures, you send the media to me, you force me to have to defend myself.”

As for his “bring your balls” remark, Malignaggi says it was about how he thinks McGregor deals with pressure.

“That’s why I reminded him, bring his balls, because in the gym, in that last sparring, he knows what I was telling him,” Malignaggi said. “Every round, I reminded him about how he had no balls. Because as the sh-t gets tougher, he shows he has no balls.” “You saw what he did in the Nate Diaz fight. Who jumps in, and takes the fight to the ground against a black belt in Brazilian Jiu-Jitsu, when you know your only chance to win is a stand-up fight? Who takes the fight to the ground, knowing you’re gonna get taken out? You gotta stand up, but you might get punished for three more rounds, and you might not land that big shot.”

“The punishment is the risk you have to take to win,” he continued. “Or you take the easy way out like somebody with no balls would do.”

Malignaggi adds that he saw the same from McGregor during their sparring sessions in preparation for the Floyd Mayweather Jr. fight.

“He has no balls, he showed it to me in the gym again in that 12-round session. He goes into these folding patterns, he’s gonna fold again on Saturday.”

Paulie will be part of the Showtime announcing team working the Mayweather fight – but Showtime says it’s not worried about slanted coverage.

WATCH: Mayweather vs. McGregor Final Press Conference Is All Business