UFC president Dana White believes former light heavyweight champion Jon Jones might go down in the history of MMA as one of the greatest could-have-been fighters ever. Unfortunately, Jon has stepped from one controversy to another controversy across his Steroid combat career, courting trouble almost every time he has made his way toward the octagon.

Jones was arrested for a DUI back in 2012, after a car crash. In 2015 he tested positive for a metabolite found in cocaine and spent a night in rehabilitation. He was later involved in a hit and run car accident with a pregnant woman. Last year, Jones tested positive for clomiphene and letrozole. Three different independent arbitrators ruled that Jon had not purposely used anything to enhance his performance. However, he got the one-year suspension for his reckless behavior.

At 23, Jon Jones becomes the youngest person to win the UFC title. He kept the 205-pound belt from 2011 until 2015, defending it a record eight times.

White and Jones, have had a strained relationship for years, and it was exacerbated when Jones failed a drug test this summer. He is currently sidelined and facing a maximum suspension of four years.

Speaking to The TSN MMA Show, White said the level of disappointment surrounding what Jones could have accomplished rivals any athlete.

“Ever, in all of sports,” White said. “The guy is so talented and gifted, God knows what he’d be doing right now if he hadn’t ever gotten in trouble.

“He could possibly be the heavyweight champion and have the defense record that couldn’t be broken. The list goes on and on of what could have been with Jon Jones.” 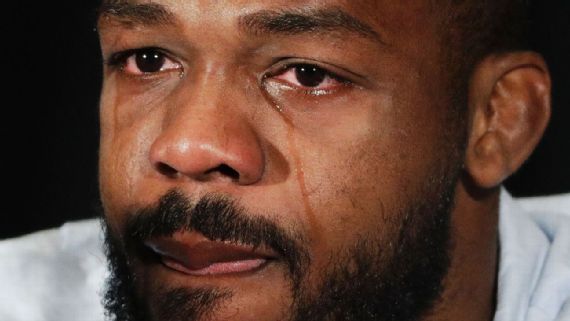 Jones has maintained his innocence in the positive drug test from July. He tested positive for metabolites of oral Turinabol, an anabolic steroid. The failed test wiped out a knockout win over Daniel Cormier at UFC 214.

It is the second failed drug test of Jones’ career. He recently served a one-year suspension for a failed drug test in 2016. Jones said that positive test was the result of an unmarked sexual enhancement pill.

His team is currently investigating the latest failed test and planning a defense. Jones faces potential sanctions from both the California State Athletic Commission and the United States Anti-Doping Agency.

Despite the fact that Jones is one of UFC’s most marketable athletes, White said he’s not following Jones’ defense closely.

“Whatever happens, happens,” White said. “Believe me, I’m not mentally or emotionally invested in that anymore.”

The latest update on the status of the former champion Jon Jones is awaiting a hearing in December to decide his fate. What you think his career will be over or return to fight in the Octagon someday.

WATCH: The ‘Master Tip’ For The Triceps Workout