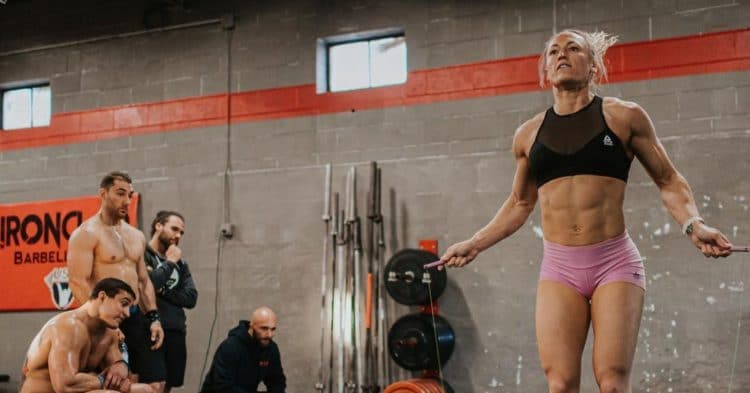 The 2021 CrossFit Games Team Quarterfinals Workouts have been announced, and the keyword is volume. The teams will be pumping up the volume in terms of reps count and heart rate.

We already saw the individual athlete Quarterfinals, which tested a variety of skills for those competing solo. Now we know what the workouts will be for the Teams, as they complete five events to etch their place in the Semifinals.

These are the workouts, as revealed through the CrossFit Games Instagram.

A total of four rounds will be performed, with one male from each team performing one round, then repeating that cycle. Each round includes:

That will be followed by an additional workout of two rounds where one of two male athletes perform one round each of the following, and then repeating.

This workout involves four reps of the max front squat the athlete can perform. The heaviest attempt that is successful counts towards the team total. There is a time cap of 20 minutes.

In this workout, the reps count will be 9-6-3, and the two females of each team will perform first, followed by the males. The time cap is 15 minutes. The men will use 175-pounds and a 30-inch box, where the women will use 125-pounds and a 24-inch box. The workout starts with the reps cycle of snatches, followed by the same reps cycle of 9-6-3 of burpee box jump-overs.

Four-time Fittest Man on Earth Rich Froning of Team Mayhem Freedom posted a mild complaint on Instagram tagging CrossFit Games Director Dave Castro. He referred to the Quarterfinals Team workout as a combined throwback Thursday and April Fools Day and 4/20. In addition to his Fittest Man on Earth wins, Froning has also taken his own Team CrossFit Mayhem Freedom to victory multiple times.