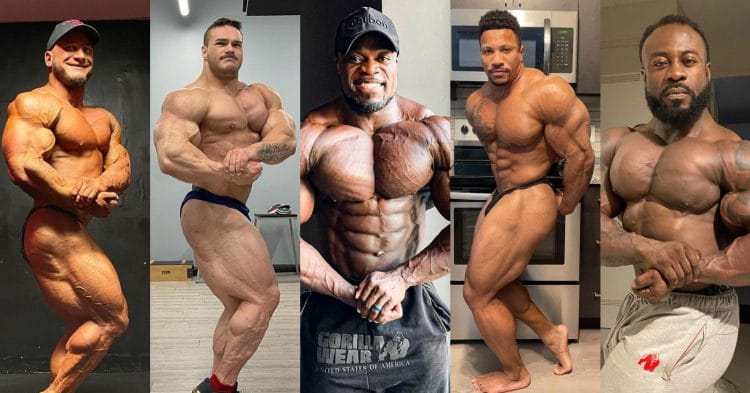 The 2021 Mr. Olympia goes down from October 7th-10th, in Orlando, Florida. With about seven weeks to go until the contest, some of the top Men’s Open competitors show off their physiques, as prep starts amping up.

This year’s Olympia promises to be one of the best yet, as it travels across the country to take place in Florida. The list of athletes who are qualified is growing, and with each qualifier the roster gets even deeper.

With around a month and a half to go until the contest, prep is really heating up for the top competitors in this show. So today we will be taking a look at some of the top Men’s Open bodybuilders, as they share physique updates.

Heading into the 2021 Mr. Olympia, Brandon Curry has revenge on his mind. He won the 2019 Olympia, but lost that throne last year, when Big Ramy had one of the most incredible packages ever seen on stage, sweeping the contest.

Curry has made it clear over the last few months that he believes he knows the changes that he needs to make, in order to get his title back, namely adding some more mass. and bringing up some of his weak points. He is certainly looking huge in these recent updates, so it will be interesting to see the package he brings to Orlando.

Son of the legendary Lee Labrada, Hunter will be making his second Olympia appearance this year, after coming in 8th place last year, and winning the Chicago Pro to qualify for the show this year. He is one of the most promising prospects on the stage, and if his recent posts to Instagram are any indication, he looks primed to have a better placing than in 2020.

While it may not be this year, Hunter seems destined to eventually end up as one of the top three bodybuilders in the world. He certainly seems ready to bring an insane level of conditioning this year, which will likely serve him well against the other competitors.

After he took a big win at the 2021 Cali Pro, Patrick Moore instantly became someone to watch at the upcoming Olympia. This will be his second time on the big stage, and he is looking to improve upon the tenth place score he got in 2020.

Patrick has been known for having a well balanced physique with a lot of strong areas. If he can tighten some things up and bring some improved conditioning, he will be a force to be reckoned with this October.

Bursting onto the pro scene in 2020, there have been few prospects with the type of hype that Nick Walker brings to the table. Of course, this is in large part due to his insane and massive physique, which he will display on the Olympia stage for the first time in about seven weeks.

Nick has some serious potential, and it will be interesting to see how he stacks up with the other top bodybuilders in the world. That being said, do not be surprised if he ends up in the top ten, or even top six this year.

One of the mainstays in elite bodybuilding, William Bonac is an Olympia runner-up, and looks to one-up that status this year. While he does not have the size of some of the other athletes on stage, he always brings a level of conditioning and balance that makes him a serious threat.

A real veteran of the sport, William is never too far from the top of the mountain. It will be interesting to see what package he takes to the stage with him this year, but it seems like he is prepared to bring one of his best ever

With so many top tier bodybuilders competing at the 2021 Mr. Olympia, there is no telling who will walk away from Orlando, Florida as the champ. Any of these guys has the potential, and there are several others that are not mentioned here who stand a chance too.

Why Does Pre-Workout Make You Itch?