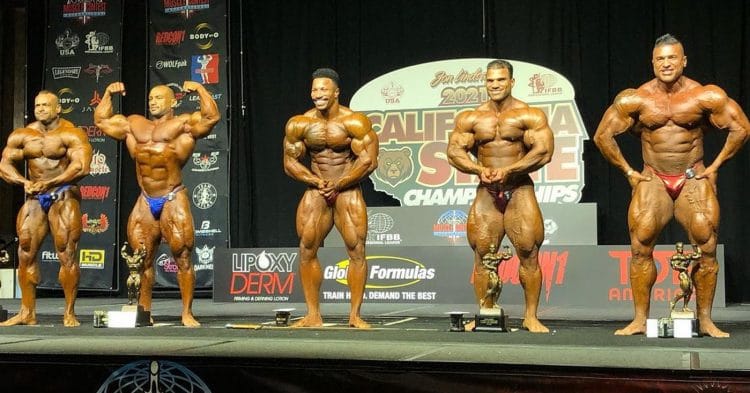 The 2021 IFBB California Pro took place on Saturday, May 29th, 2021, at the Anaheim Marriott in Anaheim, California. This is the complete results and recap of this bodybuilding show,

The month of May has been a busy one for bodybuilding fans around the world. We are in the midst of the hottest part of the qualifying season for the 2021 Mr. Olympia, and this year’s Cali Pro comes as the third IFBB Pro event this month.

First we saw Justin Rodriguez conquer a debuting Blessing Awodibu and others at the Indy Pro. Then just a few days later, both men returned to the New York Pro (which actually took place in Tampa, Florida), but they were no match for the red hot Nick Walker, who won that show.

That brought fans across the country, to 2021 IFBB California Pro, where this busy month of bodybuilding action came to a close. This contest was largely made up of just the Men’s Open Division, with several NPC and Masters Divisions for other categories.

There were two main names that people were keeping an eye on, out of the ten Open athletes: a returning Patrick Moore, and Hassan Mostafa, who scored a strong third place at the New York Pro. It goes without saying that these two were the expected favorites to win.

These were not the only names that were worth paying attention to at the Cali Pro, though. The roster was also littered with gems such as Mohammed El Emam, who completed the trifecta when he competed in all three contests in May, as well as Olympia vet Fred “Biggie” Smalls, and  the promising Eddie Bracamontes.

By the end of the night however, only one man could walk away from the contest as the victor, and with that coveted Olympia invitation. So without further ado, below are the full results of contest.

Congratulations are in order for Patrick Moore  for winning the 2021 Cali Pro. It will be great to see them on stage with the rest of the competitors at the Mr. Olympia.