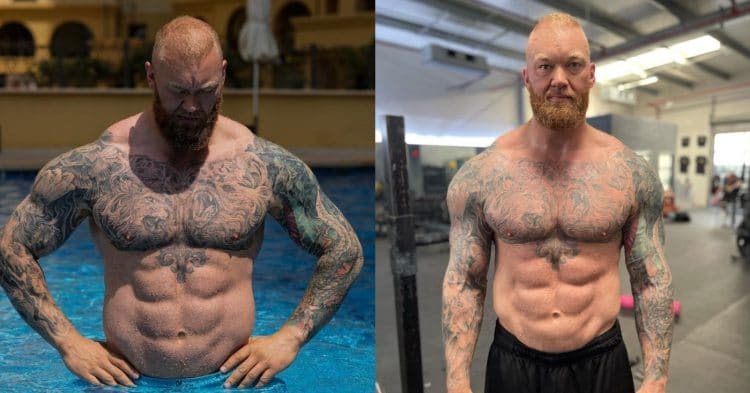 Hafthor Bjornsson may not be boxing Eddie Hall next month, but he is still going to be facing off against Devon Larratt. A couple of weeks out from this contest, he showed that he is in phenomenal shape after some amazing weight loss.

Bjornsson has been preparing hard to face Hall, with both men training for over a year. Thor even had two exhibition boxing matches, so that he could be better acclimated to the ring when he faces his strongman rival.

While it is disappointing that this fight has been delayed, the fruits of his labor are still evident. In fact, he shared a picture to Instagram that proves that, when the once 450lb Mountain showed off his lean, shredded 340lb physique, having lost 50kg.

The weight loss transformation that Hafthor Bjornsson has gone through has been nothing short of incredible. He looks like a legitimate fighter, which is insane considering how massive he was just a year and a half ago, when he hit the world record for the heaviest raw deadlift of all time.

It has been incredible to watch the transformation take place, as he looked thinner and more jacked with each passing physique update. It is clear that the months of boxing training and increased cardio work has paid off, as he now looks to be in the best shape of his life.

While it is certainly disappointing that Bjornsson will not be fighting Eddie Hall on September 18th, it is going to be exciting to see him back in the ring once more, before he squares up with the Beast, himself. Things got a little dicey with his second exhibition boxing match, so it will be fascinating to see the improvements he has made in his technique this time around.

The good news, it seems that Eddie is on the mend, and will be able to get back to full time training soon. So hopefully he and Hafthor Bjornsson will be able to meet in the ring sooner than later, so that they can finally settle the beef that has been brewing for years.

In the meantime though, fans can enjoy watching Thor fight Devon Larratt, on September 18th, on a PPV card that can be purchased on CoreSports.world. It will be the main event on a card that will feature the likes of Stefi Cohen, as well as CrossFitters Josh Bridges and Jacob Heppner.