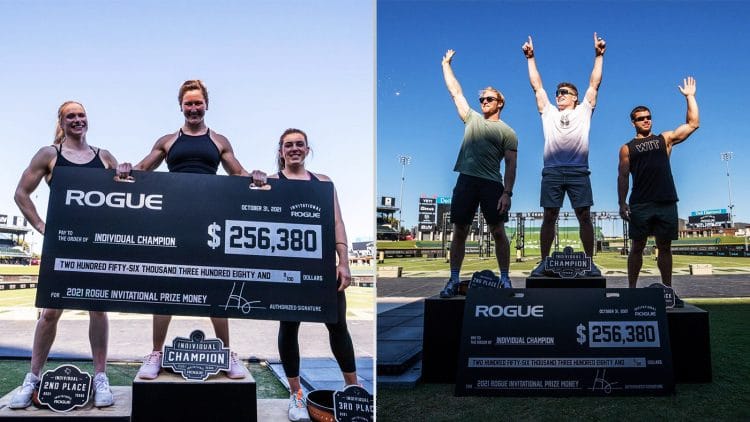 2021 Rogue Invitational CrossFit Individual competition is in the books. 40 of the world’s most elite athletes competed for the top spot in the Dell Diamond Stadium at Round Rock, Texas from Oct. 29th to Oct. 31st. The exciting tooth-and-nails competition saw some of the most accomplished athletes and newcomers go at it with giant fervor.

Competing in his first Rogue Invitational, 2021 CrossFit Games winner Justin Medeiros emerged victorious in the men’s division. Medeiros finished in the top five across all seven events in his winning effort. When the final scores came in, Medeiros had an 80-point lead over silver medalist Patrick Vellner and a massive 120-point lead over Jeffrey Adler, who finished third overall.

Five-time CrossFit Games winner Tia-Clair Toomey-Orr continued to have a successful 2021 as she secured her third Rogue Invitational title in the women’s division. Toomey-Orr had to fend off stiff competition from Annie Thorisdottir.

The Icelandic ace maintained an overall lead heading into the final day of the competition. However, Toomey-Orr surged past Thorisdottir on the final day and won the championship gold. Annie Thorisdottir and Gabriela Migala finished second and third, respectively. Tia-Clair Toomey-Orr took a 65-point lead over Thorisdottir when final scores were announced.

The shortest time required to finish all the workouts determined the winner of this event. Patrick Vellner won the men’s event by taking a 25-second lead over Justin Medeiros. Björgvin Karl Guðmundsson occupied the third spot, taking a mere two seconds more than Justin Medeiros.

Meanwhile, on the women’s side, Anne Thorisdottir claimed the first spot while Gabriela Migala and Tia-Clair Toomey-Orr won the second and third place, respectively.

The maximum weight lifted determined the winner of this event. With a 166.4kg (367lbs) load, Guilherme Malheiros walked away with the first spot while Jeffrey Adler claimed second place with 163.2kg (360lbs). Justin Medeiros earned the third spot 159.6kg (352lbs).

Tia-Clair Toomey-Orr won the first spot in the women’s division. Laura Horvath and Amanda Barnhart followed with the second and third spots.

The fastest time determined the winner of this first event on the second day of the competition. Jayson Hopper completed these workouts involving echo bikes and thrusters in a little over 2:30 minutes and edged past Justin Medeiros (2nd) and Uldis Upenieks (3rd) to win the first spot.

Amanda Barnhart finished the workouts in 2:43.23 minutes to emerge victoriously and left the second and third spot for Laura Horvath and Annie Thorisdottir in the effort. Tia-Clair Toomey-Orr could not find a lot of success in this event as she finished seventh.

Justin Medeiros scored his first win at this event that tested the endurance of competing athletes. Patrick Vellner and Chandler Smith finished second and third, respectively. All three men finished the workouts in less than ten minutes time.

Taking a little over 11 minutes to finish, Haley Adams secured first place on the women’s side. Toomey-Orr made a strong comeback at the event and claimed the second spot while Gabriela Migala claimed third.

Patrick Vellner and Justin Medeiros took the first and second spot in the classic 21-15-9 reps event. Both men finished the workouts in less than five minutes. Alex Vigneault claimed the third spot in the men’s division.

Annie Thorisdottir claimed her second win after Goruck by finishing the workouts and took slightly over five minutes to finish the workouts. Carolyne Prevost and Haley Adams won the second and third spot, respectively while Tia-Clair Toomey-Orr finished seventh at the event. The first place in this event allowed Thorisdottir to take the overall lead over Toomey-Orr heading into the third day of competition.

Becoming the only athlete to finish this event in less than fifteen minutes time, Björgvin Karl Guomundsson claimed the first spot. Will Moorad and Jeffrey Adler won the second and third spots respectively.

2020 CrossFit Games Bronze medalist Kari Pearce won the event with a 14:46.87 minute finish in the women’s division. Pearce has announced her retirement from competitive CrossFit and the 2021 Rogue Invitational was her last appearance as a competitor. The second spot in this event allowed Tia-Clair to get an overall lead over Anne Thorisdottir and reclaim the first spot heading into the final event. Kristin Holte, who has also announced her retirement earlier this year, finished third.

Performed in a bracket tournament format, the athletes participated in the duel in heats. The slowest times were eliminated in each heat until the field had five men and five women athletes. Justin Medeiros, Guilherme Malheiros, Saxton Panchik, Travis Mayer, and Samuel Kwant made it to the finals in the men’s division. Justin Medeiros defeated Samuel Kwant in the finals and secured first place in the competition.