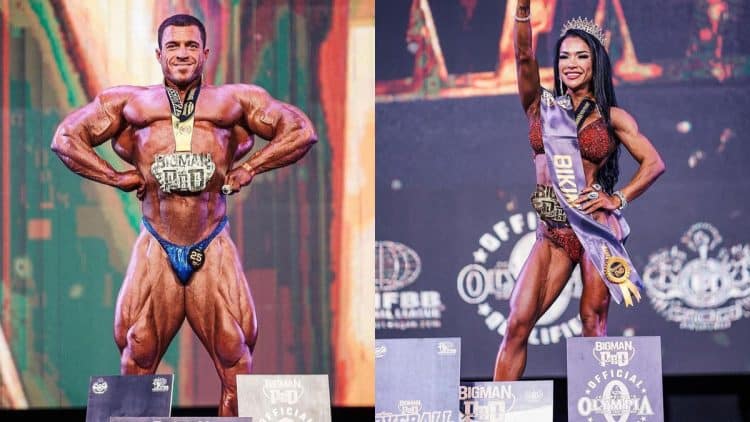 The 2022 Bigman Weekend Pro Spain is one of the very first qualifiers for next year’s Olympia contest. Bodybuilders from Men’s Open and Bikini battled in Alcante, Spain on November 27 for an early chance to secure an automatic 2023 Olympia qualification.

At last year’s 2021 Bigman Weekend Pro, Angel Calderon won the Men’s Open title. However, he won’t be competing at the 2022 Bigman Weekend Pro Spain event. Therefore, when all is said and done, a new champion will be crowned.

In addition to the Men’s Open headliner, competitors from the Bikini category battled on stage. The reigning and defending champion Ivanna Esvandar came into the contest as a frontrunner eager to prove herself as the best once again.

The Men’s Open division at the Bigman Weekend Pro Spain this year is stacked with talent. With names like Brett Wilkin, Theo Leguerrier, Andrea Presti, and Mohamed Shaaban all vying for a 2023 Mr. Olympia qualification, fans expect a highly competitive show. Check out a full list of winners and results down below:

The lineup was exceptional in Spain and Mohamed Shaaban entered the show last-minute in hopes of qualifying early for 2023 Mr. Olympia. In addition to Shaaban, Theo Leguerrier, Andrea Presti and Brett Wilkin all brought impressive physiques.

After finishing second place at the 2022 Romania Muscle Fest Pro, Wilkin was determined to produce a victory this weekend. He was guided by his coach, Matt Jansen, who is also helping Nick “The Mutant” Walker prepare for his second Mr. Olympia contest. By the end of prejudging, Wilkin and Presti were gunning for the Open Bodybuilding title.

Presti’s front double bicep was one of his strongest poses and he pushed Brett throughout the finals with size and fullness. In the end, Brett Wilkin’s spectacular conditioning carried him to victory against Presti and he’s now qualified for 2023 Mr. Olympia.

All eyes were on the reigning Bikini champion Ivanna Escandar. Her conditioning and stage presence were on full display throughout the finals. After being challenged by Shantal Barros, Ivanna Escandar won another Bigman Weekend Pro title.

Fitness Volt congratulates the two winners on their major victories!

Hadi Choopan has won the 2022 Mr. Olympia title. Yes, after dedicating his life to the sport of bodybuilding and...