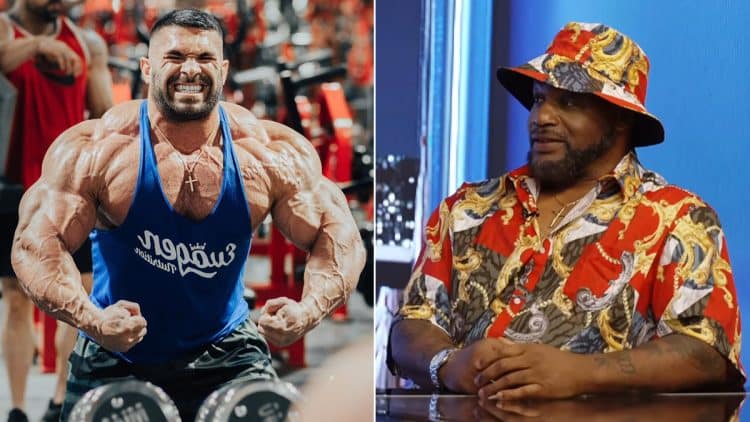 Bodybuilding Hall of Famer Chris Cormier may have moved on from professional competition over a decade and a half ago, but he maintains his presence in the community as a revered figure. In a recent YouTube video uploaded to Muscle and Fitness’ channel, Olympia judge Terrick El Guindy and veteran bodybuilder Tim Wilkins joined Cormier to discuss the potential locations for the Olympia outside of the US and share their breakdown of Derek Lunsford’s chances at the show next month.

Preparations for the upcoming 2022 Olympia are in full swing. There is a lot of excitement surrounding the Men’s Open division, which hosts some of the freakiest mass monsters in the world. Reigning two-time Mr. Olympia Mamdouh ‘Big Ramy’ Elssbiay enters the contest as the favorite to add a third title under his belt. However, this year’s season is turning out to be one of the most competitive in years, with the rise of prospects and unique addition to the roster.

212 standout Derek Lunsford emerged as the wild card of the Men’s Open category. He started with an impressive guest posing appearance at the 2022 Pittsburgh Pro, where he held his own against some of the category’s most proven talents, including Nick Walker, former Mr. Olympia winner Brandon Curry, and Hunter Labrada. His commanding performance got the attention of Olympia president Dan Solomon, who disclosed that a special invite was being considered for Lunsford in July.

About two months later in September, Lunsford accepted a special invitation to compete in the Open division for the 2022 edition. The decision drew criticism from some members such as Open competitor Iain Valliere, who argued Lunsford should have qualified for the show with a win. On the other hand, seasoned professional Chris Cormier agreed with the choice to give Lunsford a special invitation because he believes Lunsford deserved it.

Chris Cormier Sees ‘Promise’ in Derek Lunsford: Best is yet to come

Speaking on Prime Time Muscle, Chris Cormier sat down with Tim Wilkins and judge Terrick El Guindy to discuss the highly-anticipated debut of Lunsford in the heavier weight class at the 2022 Olympia.

Cormier: “He definitely is putting on the size, probably feels a lot better getting ready for a show at a heavier weight. Mentally it’s going to help him with his training because you have all the energy in the world with the extra carbohydrates and everything.”

“I feel like he hasn’t his peak on the stage yet. We haven’t seen the best Derek yet. At a heavier weight, it’s going to be a toss-up, you don’t know how it’s going to turn out but just seeing him when he was posing at Pittsburgh, there’s promise there. His body’s going to be way more dense and full than we have seen him.”

Judge El Guindy weighed in with a similar sentiment, backing Lunsford to shock the world.

El Guindy: “I think that Derek Lunsford can surprise the entire bodybuilding world. If you look at Hadi Choopan, when he placed third, he was conditioned, posed well… I think Hany and Derek will nail the conditioning and they’ll be ready for Mr. Olympia. I believe a lot of guys are feeling the pressure because it’s so competitive.

“If they don’t give everything they got, they are going to fall behind. Guys like Lunsford, there’s pressure on him. If he doesn’t get the top five people are going to start questioning him. He needs to prove that he belongs there. I think he’s going to give all he’s got.”

Last month, Derek Lunsford gave fans a sneak peek at his preparations for the sport’s biggest show of the year. He shared an extensive sleeve-busting arm workout that he utilized while in prep for the nearing contest.

The Olympia will finally return to its longtime home of Las Vegas after a two-year hiatus. In 2020, COVID-19 rocked the world and changed lives for everyone. Olympia chose to move the 2020 competition across the country to Orlando, Florida due to pandemic-related restrictions. Orlando would serve as the host for another year in 2021 before the world got back to normal for the most part.

Given the international presence of the Olympia brand, Chris Cormier, Wilkins, and El Guindy shared their picks for the ideal location outside of the country.

Wilkins: “I loved having it in Orlando but there’s something magical about Vegas. Vegas has that big fight, Super Bowl feel to it.“

El Guindy: “I’m a little biased. If you put it in a stadium in Sao Paulo, Brazil, you would get 60,000 people in that stadium watching the event because Brazilians are insane for bodybuilding, for the brand Mr. Olympia… Obviously, Vegas is incredible and a lot of our brand history has been in Vegas. But there was something unique about Orlando. There was something about it I’ll never forget.”

Although Derek Lunsford is the reigning 212 Olympia champion, he will not return to the division to defend his throne. Instead, Lunsford is fully focused on making a statement in his Open division showing at the Super Bowl of bodybuilding.