Brian Shaw and Bobby Thompson team up to train for the 2022 Shaw Classic. 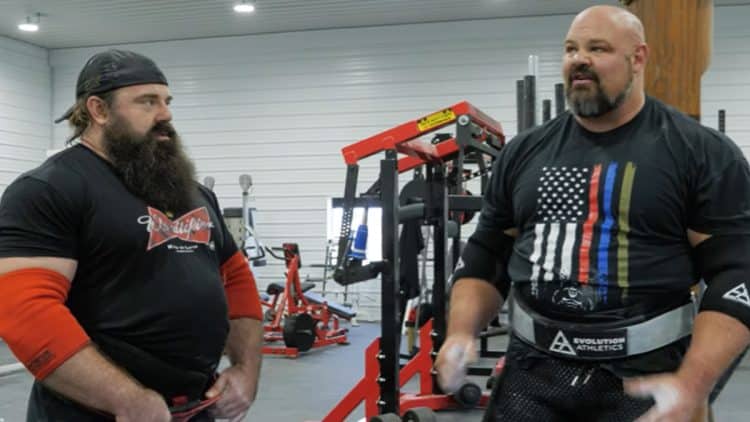 Continuing his trend of pairing up with other elite Strongman athletes, Brian Shaw hosted one of the greatest log pressers in the world, Bobby Thompson. Bobby holds the American Log Lift record of 217.5 kilograms (478.5 pounds), which he set at Anthony Fuhrman’s 2021 Clash on The Coast. So, it is obvious that Brian could exchange some knowledge with Thompson in a way that both of them would benefit.

Shaw and Thompson paired up to prepare for the 2022 Shaw Classic, which will take place on Aug. 13-14, 2022, at the Budweiser Event Center in Loveland, CO. It will consist of eight events, one of which is the Log Press. Even though the pair spent most of their time on this exercise, they also performed some workouts tailored to the event. Brian Shaw released the full video footage of this on his YouTube channel.

Just a few days ago, Brian Shaw and Bobby Thompson trained legs. However, seeing that log press is Bobby’s specialty, this training session is more notable.

Shaw and Thompson opened up this workout with a couple of warm-up sets on an empty log, after which they added a 25-pound plate on each side. For each subsequent set, they added plates. Sadly, due to SD card problems, some video footage was lost. So, the video then skips to their final set, in which both men perform heavy singles of unknown weight.

Brian Shaw and Bobby Thompson then move on to train with the Monster Dumbbell. This is important for them as a Circus Dumbbell will be one of the events for the 2022 Shaw Classic. Brian has three progressively heavier monster dumbbells in his gym, and they started with the lightest one. We can see the difference in their techniques immediately, as Brian alternated his arms for each rep, and Bobby only lifted with one arm.

Upon finishing with the first dumbbell, Brian Shaw picked it up with one hand and carried it. This blew Bobby’s mind, as the handle is really hard to grip.

“You know Brian, I get it. You don’t have to show me… That is really impressive… There is no way I’m gonna do that.” said Thompson.

Bobby attempted and lifted the dumbbell successfully, but was not able to carry it. Brian then once again displayed his immense grip strength, and carried the heavier dumbbell in the same manner. Brian always had one of the strongest grips in the world. However, Brian usually does not usually perform extremely well in grip events at official competitions, and now he revealed why.

“That nerve damage that I had in my left hand is what really compromised it. Because Hercules Hold used to be ridiculous. The left hand is always what goes first.” said Shaw.

Shaw and Thompson then pushed each other to the limits in a few more sets of dumbbell overhead presses. Upon finishing this exercise, the pair move outside to train the Sandbag Toss, as the 2022 Shaw Classic will feature a throwing event. They didn’t set up a bar, instead focusing on technique. To finish the video off, Shaw and Thompson expressed their gratitude to each other.

In case you are wondering what the full events and lineup for the 2022 Shaw Classic look like, you can check it out here.

Both Brian Shaw and Bobby Thompson will be competing at the 2022 Shaw Classic. The last time they went head-to-head was in the Stone-Off at the 2022 World’s Strongest Man, where Brian Shaw came out victorious. It was apparent that the pair had no hard feelings because their synergy in Brian’s most recent video looked flawless. They now have a few more weeks to prepare until it is time to compete again.