The 2022 Shaw Classic has revealed its most stacked lineup yet. 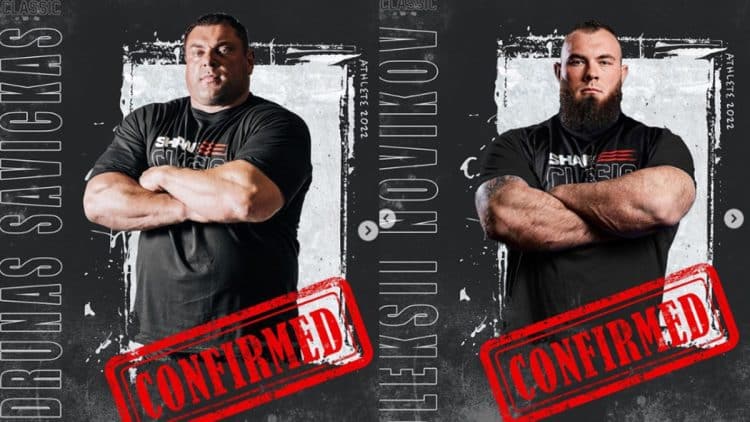 The third edition of Brian Shaw’s incredible Strongman competition is coming back five weeks from now and the lineups have just been released. Sixteen of the greatest athletes will travel to compete at the Budweiser Event Center in Loveland, CO. The 2022 Shaw Classic is a two-day competition, scheduled for Aug. 13-14, 2022.

Shaw Classic’s official Instagram account confirmed all 16 Strongmen who will be competing. There are many names on the list that catch the eye, but none come close to Zydrunas Savickas. Big Z is coming back to compete against the greatest in the world once again. As a four-time World’s Strongest Man winner, he is comfortable in such an environment.

Apart from Zydrunas Savickas, three other competitors have at least one WSM title under their belt. Brian Shaw won the most prestigious Strongman competition four times as well, Oleksii Novikov won it once in 2020. While Tom Stoltman has been holding the title of World’s Strongest Man for the past two years.

The 2021 Shaw Classic champion, Trey Mitchell, is also coming back in the hopes of defending his title. However, that will be significantly harder to do this year, since the lineup in three years of Shaw Classic has never looked more stacked. The 2021 Europe’s Strongest Man, Luke Stoltman, is not coming to play. While the rising stars, Mitchell Hooper and Evan Singleton, also want to prove their worth.

There seem to be no weak links in the 2022 Shaw Classic lineup, as any competitor could put up an event performance that would change the entire leaderboard. Kevin Faires proved that with his record-breaking Dinnie Stone Replica Walk. Jerry Pritchett and Gabriel Peña, on the other hand, could steal some points on the deadlift event.

Brian Shaw has also decided to integrate an open division into this year’s Shaw Classic. It is completely separate from the original lineup and athletes have to qualify through an online competition. The best 16 scores from both Strongman and Strongwoman classes will qualify for the 2022 Shaw Classic Open.

“16 men and 16 women will be battling it out to win cash prizes, plus the winner of the men’s event will automatically earn a spot in the 2023 Shaw Classic.”

With this division, Brian Shaw will enable an easier route for Strongmen and Strongwomen to prove themselves and burst onto the scene.

It is amazing to see what Brian Shaw has managed to build in just a few years. The Shaw Classic became one of the most stacked competitions in the world, while it is also being held in a humongous venue to meet the requirements. It will definitely be interesting to watch both the Pro division and the Open, as some underdogs could put up surprising results.

Cardio for Big Guys – The Best Exercises and Methods