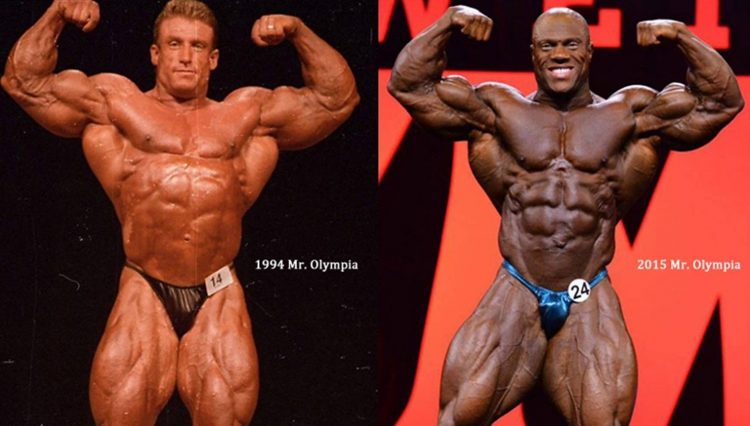 Battle of the champions

After winning his seventh straight Olympia contest, Phil Heath entered rarefied air with the likes of Dorian Yates, Arnold Schwarzenegger, Lee Haney, and Ronnie Coleman. These men are the only bodybuilders to win the Superbowl of bodybuilding championships multiple times. It’s a feat that Phil Heath is surely proud of and from the looks of things he’s just getting started. But it’s interesting to wonder how Phil Heath would have stacked up against one of the former champions in their prime.

Dorian Yates was once considered the best of the best at bodybuilding. Not even Shawn Ray, Flex Wheeler, or the great Kevin Levrone could dethrone the former Olympia king when he was at the top of his game. Even by today’s standards, Dorian Yates was an absolute freak with genetics that boggled the mind. He made constant leaps of greatness between every competition. When you went to an Olympia show you could bet you were going to see a new and improved version of Yates every time.

“Is Dorian Yates was better than Phil Heath?”

Shawn Ray: Dorian Was Way Too Wide For Phil Heath

In the following video bodybuilding veteran, Shawn Ray weighed in on how he thinks Phil Heath would compare on stage to Dorian Yates. Shawn says that Phil Heath boasts better arms -especially triceps- than Dorian. Phil also has better abdominals and thighs, but the real problem for him will be Dorian’s frame.

“That wide back of Dorian Yates is gonna make Phil Heath look even more narrow than he actually is. He’s gonna be just as hard as Phil Heath especially from the rear when you see those frickin calves popping out… The back is Dorian’s all day long, but he’s gonna battle with him in that back double bicep, but when they open up in that back lat spread, Dorian opens up way too wide for Phil – front lat spread way too wide for Phil.”

Shawn says that Phil has never had a competitor test him in this way.

See the full breakdown below.

But if you are still wondering how the two champions would stack up against one another then you’re in luck. Take a look at the comparison video below and judge for yourself who was in the better condition in their prime.

Who do you think would win, Phil Heath or Dorian Yates?

WATCH: Phil Heath Explains The Horrors of Leg Day And The Struggles Of Being 275 lbs

Samir Bannout, a 1983 Mr. Olympia winner, led an exciting career that saw him face a number of high-profile legends...

Retired bodybuilding legend Dorian Yates was known for his massive physique and spectacular back detail, which he developed mainly from...