REGRET: He quickly realised he picked on the wrong guy!

The angry commuter was hit with instant Karma after realizing he had picked on an MMA trained fighter.

Throwback: A clip of the shocking interaction – filmed on a New York subway train – has been seen millions of times online!

In video footage, we can see subway commuters are forced to move out of the way as two men start trading blows. The first furious dude – in a blue hat and white shirt – squares up to his rival, shouting abuse in his face.

Trying to remain calm and not to react, the second man in a purple shirt smiles and looks at other onlookers. At one point, a woman steps in to pull the first man away, saying:

“You don’t want to do this. You’re acting very ignorant.”

But, still fuming, the man in white shouts back:

The gentle giant in the purple shirt doesn’t react to attacker’s violent words and instead attempts to tell him to sit and calm down. It only acts to infuriate the man further.

“Don’t touch me bro,” he says. “You need to punch me in the face right now, but you know what, you’ll need to hit me hard.” 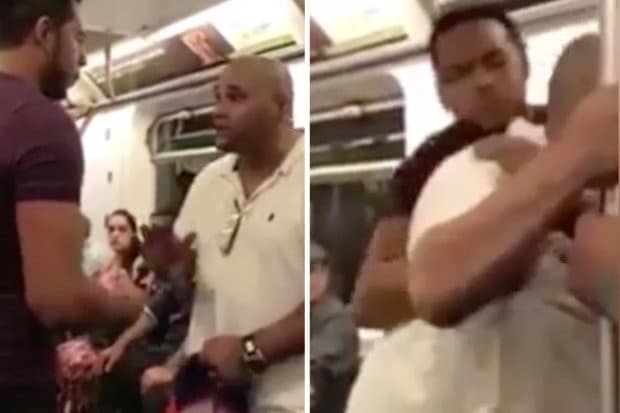 After few minutes of abuse, the taller man finally caves in, and his aggressor instantly realizes he’s picked on the wrong guy. The man is put in a headlock before being dragged to the floor in a rear chokehold.

Onlookers gasp and are forced to move out of the way as the pair barrel through the carriage.

“I’ve never seen anyone backtrack quicker than the guy in white,” one viewer said.
Another commented: “He deserved it, he was starting for so long without actually doing anything. Karma in motion.”

WATCH: Dave Palumbo To Kevin Levrone: “I Think You Screwed Up Your Formula”