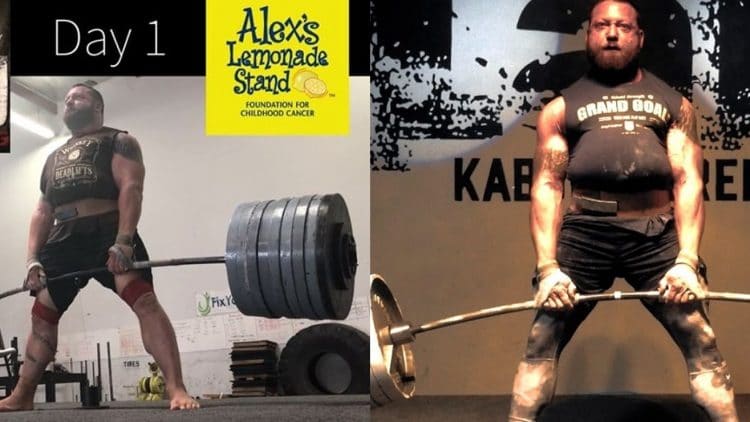 Powerlifter Chris Duffin holds a world record for the raw squat in the 220lb class. Not only that he also holds a Guinness World Record to deadlifted the most weight in one minute at 17,010 pounds (42 reps of 405lbs).

Chris Duffin from Kabuki Strength also known as the “Mad Scientist Strength” posted on his social media account earlier where he plans to deadlift 400kg/880 lbs every day for one month and shake hands with Alex’s Lemonade Stand to raise fund for cancer research foundation.

Duffin’s word from his IG stories where he wrote:

We are partnering with Alex’s Lemonade Stand, a kid’s cancer charity that raises money to fund cancer research specifically for children. It was started by a little girl named Alex when she was 4 years old. She raised over 1 million dollars by age 8 when she passed away from cancer called Neuroblastoma. Our whole team was heartbroken when we heart Alex’s story from her mom Liz on a call. You can read more about the story at 880everyday.com or on the ALSF website.”

Also reminds you this isn’t the first time Duffin plans to raise funds, earlier this year Duffin raised money for Special Olympics by squatting whopping 800 lbs every day and in their efforts they collected $6,500.00 on their GoFundMe page for them.

For new cause, Duffin will deadlift insane amount of 880 lbs for every day, and it’ll be interesting to see how he’ll handle all that stress every day for one month.

What do you think of this insane strength feat from Chris Duffin for a noble cause?

Charles Poliquin Has Passed Away At 57

Hot Topic: Could Phil Heath Turn Into A WWE Superstar?