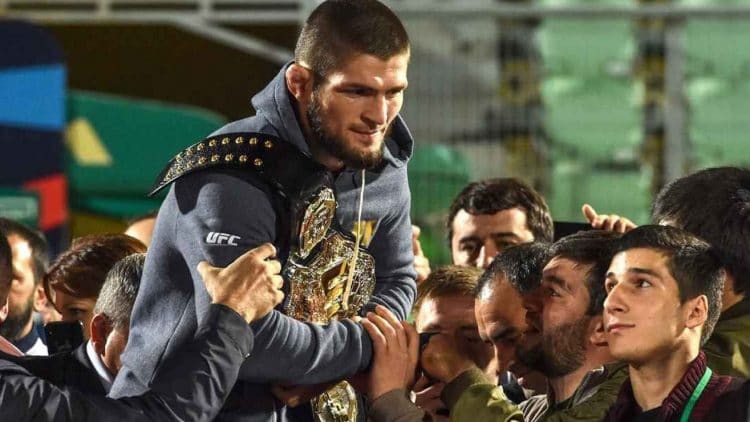 Khabib Nurmagomedov successfully defended his UFC lightweight title after brutally defeating Conor Mcgregor via submission in the fourth round, then ‘Eagle’ leaped over cage fence to attack Mcgregor’s teammate and coach Dillon Danis that nearly sparked riots. Khabib’s fight purse is currently withholding by Nevada State Athletic Commission for punishment, pending further investigation. Khabib’s father also said his sanctions would be much harsher than the ones from UFC for his son.

Khabib is now back in Russia and what a heroic welcome he receives in his hometown of Dagestan.

The UFC star was greeted by the massive crowd on Monday at Anzhi Arena in the capital of Makhachkala, after pummeling Conor McGregor at UFC 229 and took the mic to address the adoring fans. He apologizes to the crowd for his post-fight antics but also doubling down what caused brawl and his beef with brash Irishman.

“I prayed to God for one thing, to be left alone in the cage with this clown,” Nurmagomedov said, courtesy of RT. “I asked him this every day. I prayed that we would have no injuries, that we would make weight, and regain our strength, and finally be locked in that cage. Because a lot was said outside that cage, and I said that once that octagon door is shut, I am not responsible for my actions.” (Via MMAFighting)

“The first thing I wanted to show him, is the difference between our people, and his people,” said Nurmagomedov. “We know our history, our ancestors, and what our people have been through. Nothing can break us.

“And with what happened afterward, some people say I did the wrong thing, others that I did the right thing. You can’t confine an eagle to a cage. And I showed them that.”

It seems like Khabib isn’t ready to forgive Mcgregor and said jumping out of the cage to attack Mcgregor’s cornerman was appropriate and fans love his response. As for the punishment from Commission, it’s not clear, but more likely he’ll be hit with both a hefty fine and a suspension.