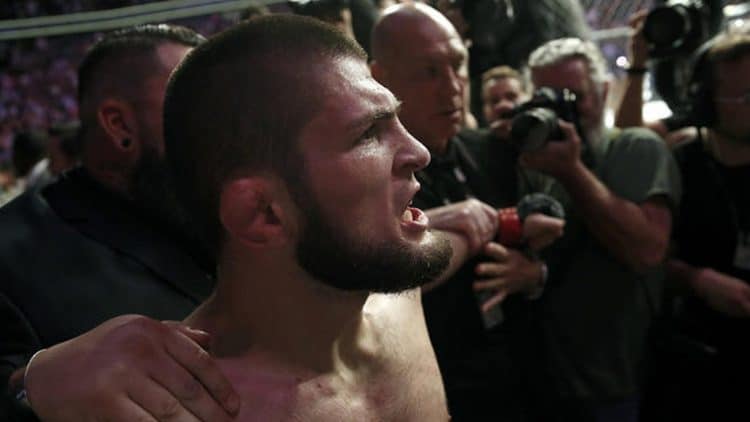 Khabib Nurmagomedov Is Not Leaving His Teammates Alone

Freshly coming off a submission win over Conor Mcgregor and embarrassing UFC 229 post-fight brawl Khabib Nurmagomedov isn’t ready to forgive anyone even the UFC on how they handled the matter afterward.

After winning over brash Irishman Khabib leaped over cage fence and attacked Mcgregor’s cornerman and Bellator’s featherweight contender Dillon Danis that sparked the riots. Two team members of Khabib’s camp also jump inside the cage to attacked Notorious. UFC expressed their disgust over post-fight melee and decided to fire some of Nurmagomedov’s friends who were involved in the brawl specifically Zubaira Tukhugov who’s from Chechnya.

Russian also blasted the organization on double standards when it comes to Mcgregor’s Brooklyn bus rampage earlier in April and what happened last Saturday night.

On his recent Instagram post, Nurmagomedov sends a stern warning to UFC where he reiterates his stance that if promotion cut ties with his team member Zubaira Tukhugov, he’ll leave UFC too.

Why didn’t you fire anyone when their team attacked the bus and injured a couple of people? They could have killed someone there, why no one says anything about insulting my homeland, religion, nation, family?

Why do you have to punish my team, when both teams fought. If you say that I started it, then I do not agree, I finished what he had started.

In any case, punish me, @zubairatukhugov has nothing to do with that.

If you think that I’ll keep silent then you are mistaken. You canceled Zubaira’s fight and you want to dismiss him just because he hit Conor. But don’t forget that it was Conor who had hit my another Brother FIRST, just check the video.

if you decide to fire him, you should know that you’ll lose me too. We never give up on our brothers in Russia and I will go to the end for my Brother. If you still decide to fire him, don’t forget to send me my broken contract, otherwise I’ll break it myself.

And one more thing, you can keep my money that you are withholding. You are pretty busy with that, I hope it won’t get stuck in your throat. We have defended our honor and this is the most important thing. We intend to go to the end.

‘The Eagle’ also told the UFC to “keep” his $2 million fight purse which is currently withholding by (NSAC) Nevada State Athletic Commission.

A UFC featherweight contender Tukhugov was slated to face McGregor’s teammate Artem Lobov by the end of this month in a UFC bout, according to ESPN’s Ariel Helwani that the fight is off from card.

The Commission is further investigating on the matter and file complaints on Khabib and McGregor for their part in the mayhem. Both are facing potential fines and suspensions.

If UFC sticks with their words and fires Tukhugov and Khabib also follow through his plan, it will definitely put UFC in a difficult situation while losing the #1 lightweight on the planet. Let’s hope UFC smartly handled the matter.