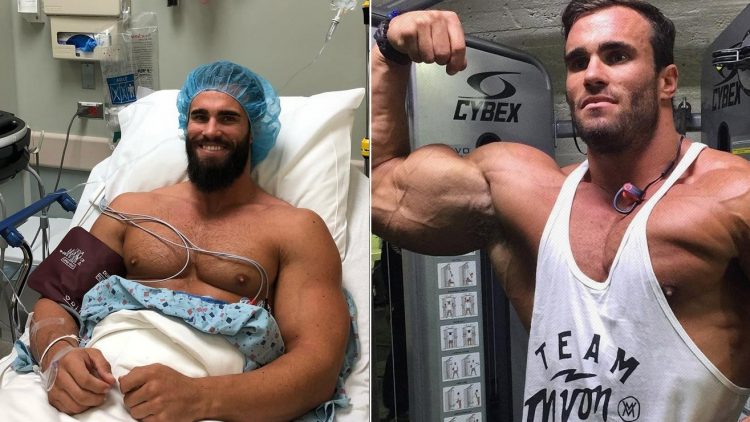 Australian bodybuilder Calum von Moger who injured his left bicep last year in November doing a ridiculously heavy bicep curl and shortly after updated his fan that he needs surgery to repair the bicep injury.

Then in December 2017, Moger, a guy who’s slated to play Arnold Swartzenegger in bodybuilding film ‘Bigger’ had successful bicep Surgery. Post surgery he shares a post on his Instagram thanking and praising to the hospital staff and his fans.

After a month later, von Moger shared a video which shows shocking changes to his body and the difference is tremendous, a proof that a month of no training can have a noticeable effect on bodybuilders sculpted physique. You can visibly see there’s quite a difference in his left and right arm; his upper body is indeed not what it used to be. That injury impacted his ability to compete in bodybuilding shows.

Earlier in April, Moger underwent surgery after damaging his knee in a rappelling stunt gone wrong.

Earlier today Moger update on his Instagram that he’s once again going for bicep surgery and 2018 has been the hardest year for me. Looking forward to making a stronger come back.

“Just checked in for surgery to repair my bicep (It was canceled before due to blood thinners I was using for dvt). 2018 has been the hardest year for me, I have been beaten again and again but that’s ok. I’ve dealt with it as best I can and I’m stronger because of it. I look forward to starting over again. Thanks for the endless support and encouragement.”

Team FitnessVolt is sending out best wishes to Calum von Moger and have a speedy recovery.