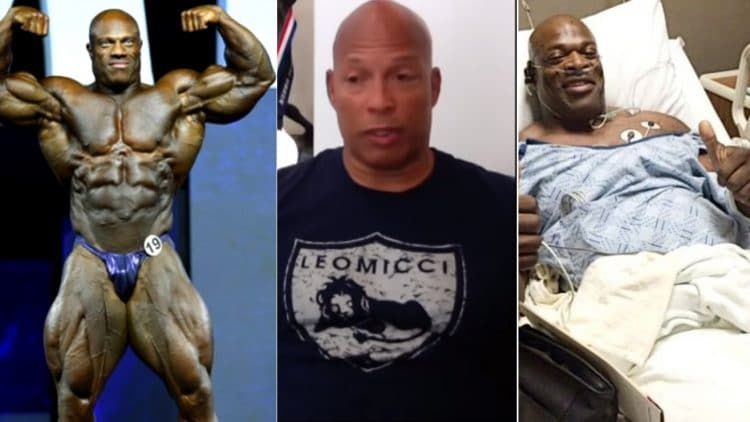 Phil’s regaining the title of Mr. Olympia highly unlikely and what Shawn Ray meant when he said Ronnie Coleman is “addicted to working out”?

We know Shawn Ray is never shy about expressing his opinions about other bodybuilders’ lives and careers but he’s recently made some pretty bold (Possibly true) statements about Phil Heath and Ronnie Coleman.

Muscular Development posted the following statement made by Shawn Ray on Instagram about seven-time Mr. Olympia, Phil Heath… “I doubt Phil Heath will ever win the Mr. Olympia again”.

While this may likely be the case, Shawn Ray’s comment received mixed responses. Phil Heath’s “bubble gut” issue is no secret and his hernias probably contributed to his loss. However, many of the people responding on Instagram felt Phil was still the best at the 2018 Mr. Olympia besides his stomach.

Not to take anything away from Shawn Rhoden but Phil Heath has supreme genetics and many people understand this aspect of bodybuilding.

However, we see the direction the sport is headed based on the 2018 Olympia contest as the look is apparently different from previous years (And maybe even the politics involved with bodybuilding)…

The other half of responses regarding Shawn’s statement about Phil Heath included bashing Shawn’s personality and pointing out his lack of Sandow trophies to his own name.

Shawn Ray made a good point in a video interview with Muscular Development when he made the following statement, “We’ve never seen it done,” regarding Phil coming back to win another Olympia. His surgeries and age have a lot to do with it, and Shawn also mentioned the top names that will be even hungrier for the 2019 Olympia competition like William Bonac and Kai Greene who have beaten Shawn Rhoden before.

Not to mention Roelly Winklaar is rapidly approaching the top spot…

Shawn Ray is most likely right when he said… “If he (Phil Heath) takes a year off, he’s done”!

Plus, he mentions how Phil’s surgeries will prevent him from looking better as a result of having his stomach cut open (Which will never look the same).

Shawn sure is opinionated but he makes sense with his assessments, which is why we must mention Shawn Ray’s statement regarding eight-time Mr. Olympia Ronnie Coleman being “addicted to working out”…

Muscular Development posted the statement made by Shawn Ray about Ronnie Coleman on Instagram (He’s on a roll).

This statement was in reference to Ronnie Coleman destroying his body as a result of pounding the weights carelessly regardless of his surgeries which has resulted in sustained injuries and the inability to function as he did previously.

In the interview with MD (Muscular Development), Shawn mentions, in response to a statement about weights being therapy for Ronnie Coleman…

Little can be argued about the detrimental effects of intense training before, between and after major surgeries (As documented).

While Ronnie Coleman was blaming his surgeon about his inability to recover (And possibly considering filing a malpractice lawsuit) his irresponsibility towards taking care of his body was apparent.

Not being able to refrain from weight training when your life depends on it, would indeed seem to be an “addiction to working out”.

Shawn Ray has lived and breathed the sport of bodybuilding and his analysis of the current situation and future of both Phil Heath and Ronnie Coleman are pretty much dead on (If not, very close).

He (Shawn Ray) may catch heat for speaking his mind too frequently but the man knows his stuff and there’s little to disagree with!

Kai Greene In Talks With New Management About 2019 Mr. Olympia