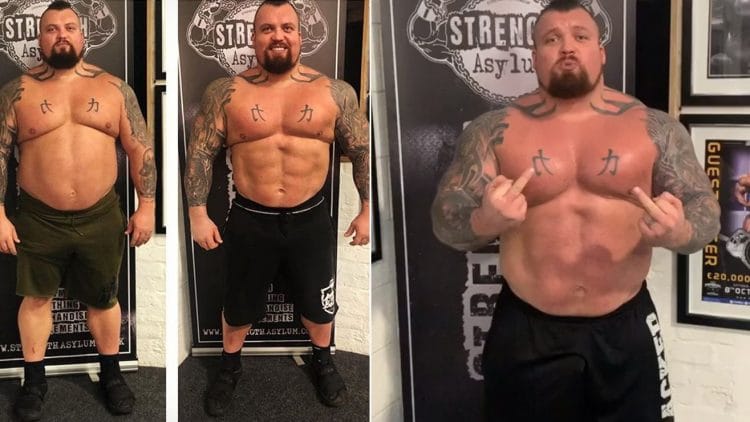 Eddie Hall AKA “The Beast” Known as World’s strongest man in both England and the UK, recently made a pretty impressive transformation (Going from 170.1kg to 163.8kg in 16 weeks) and posted it on Instagram for all to see.

Well the problem with that was he was accused of using Photoshop in his Instagram post to make himself look more muscular in his “after” photo.

He explained in his post that he lost 6kg of body fat while putting on 1/4kg of muscle in 16 weeks which would make his pictures believable to anyone who knows anything about fitness (Many don’t).

Eddie Hall has many incredible accomplishments to his name which include:

So, if he can accomplish these astonishing feats, why would people question the legitimacy of his ability to shed some body fat? (This is all it really is).

This makes total sense as he is a very large man and although his body fat was pretty high before, he could never become the strongest man in the world without having an enormous amount of muscle underneath.

So when Eddie Hall cut his body fat down, it was no surprise to see his large muscles… not to mention muscle looks more impressive and is more shapely than fat.

Now, Hall did, however, admit to using good lighting, good angles and maybe a filter or two but the Instagram video he posted in response to the haters, displayed a near identical look to his “after” photo which received all the hate.

Why would such an accomplished champion cheat his fans? Well… haters will always try to negate hard work but good on Eddie Hall for defending himself.

6 Ways To Get Shredded Lower Abs