You’d think eight-time Mr. Olympia Ronnie Coleman would have it all together after such an iconic bodybuilding career but unfortunately, life hasn’t quite gone as planned for him.

After years and years of lifting massive amounts of weight, his body finally had enough. Well… such bodily abuse required surgical intervention for his back injuries but it didn’t end there.

In a recent video interview with Muscular Development, Ronnie Coleman explained why working out too soon is not the reason for his failed surgeries.

He then went on to explain how right after his surgery he bent over in the hospital and the screws broke which resulted in the need for additional surgeries.

Now, he also said that the screws never broke during his workouts but only in therapy… Hmm… so is this the case then? Well, we do know it’s never a good idea to workout heavy soon after a big surgery and he was clearly pushing it too hard too soon.

There may be truth to both sides of the argument but we hate to see “The King” is such a sad predicament. Plus, it’s his body so he ultimately has to live with his own decisions so who’s to bash them.

…Now we get to the discussion (Same interview) where Ronnie claims to have turned pro as a completely natural competitor.

He was drug tested in 1990 for the NPC Nationals and placed third before he went on to win the World Championships after being drug tested, not once but twice!

“I was the only one in my class out of forty-four guys to show up and take the drug test”.

If Ronnie Coleman could show up on stage and dwarf everyone in the non-tested shows, it’s not that hard to believe he could at least turn pro “drug-free”.

Now whether anyone really believes Coleman was drug-free and that there wasn’t funny business going on, it’s his word (And eligibility) against everyone else’s.

Ronnie Coleman has accomplished more than anyone in the sport and was a great champion so whose business would it be to discredit him anyways.

6 Ways To Get Shredded Lower Abs 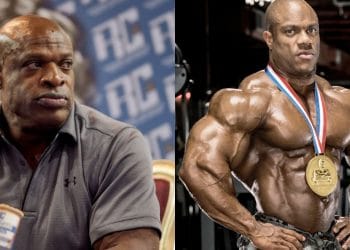