10 Greatest Benefits of the Clean and Jerk Exercise

Look no further for a beastly full body exercise!

The Clean and Jerk is a true measure of strength, endurance, stability, speed, explosiveness and anything else you could imagine from such a powerful and demanding (Yet, prestigious) movement.

Used as one of the two main Olympic lifts (Snatch is the second), the Clean and Jerk requires a full body effort to perform the two movements involved in the lift (As if one isn’t hard enough).

The first movement (The Clean) is done by raising the barbell off the floor into a racked position (Bar across front deltoids in a squat to standing motion). Then after standing with the barbell, the lifter will perform the second movement (The Jerk) by bending the knees enough to get momentum for the overhead, lift while moving your body under the bar and extending the arms with legs ending in a lunge-like position (One front and one back). 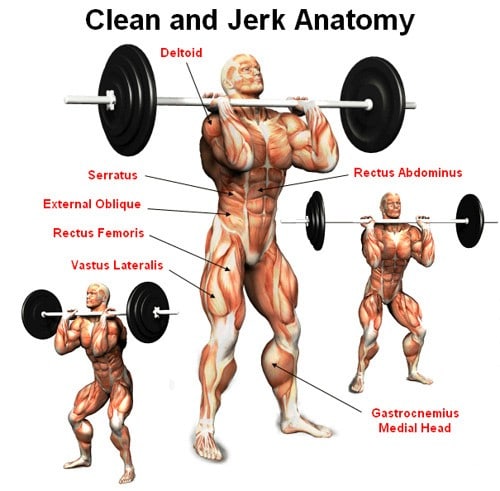 It sounds difficult but it’s really simple if you see it for yourself… now, there are benefits to doing Clean and Jerks (Not just for Olympic lifting purposes).

Here are 10 great benefits of the clean and jerk…

Ok, so you might be thinking “thanks Captain obvious”… but it’s only fair to include strength as the top benefit because that’s the whole point of a power movement, right? The reason it’s used as one of the Olympic lifts is because the Clean and Jerk is a real test of full body strength.

Of course, the Clean and Jerk requires other important factors besides just strength (Technique) to perform the movement but it is called “weightlifting” for a reason and strength is well known as the main component.

Which muscles does it strengthen? 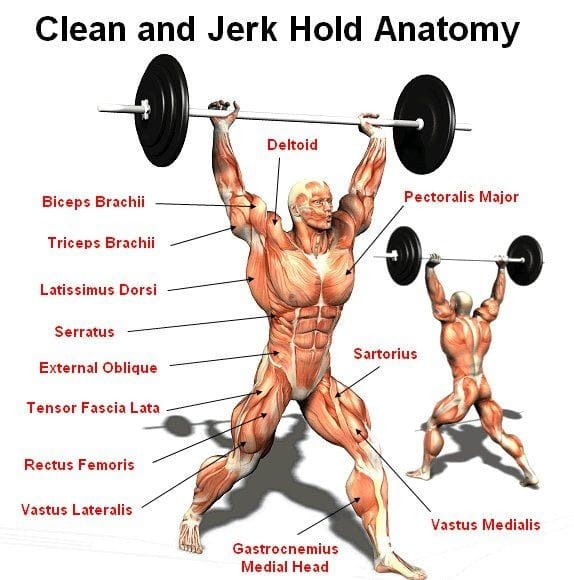 The short answer… everything. That’s right, the Clean and Jerk involves a pulling, pushing and squatting position to stimulate nearly every major muscle group. It takes a lot to perform two movements in one, especially with a heavyweight.

Consistently performing heavy, compound movements like the Clean and Jerk results in Neural adaptation, which basically means a “change in stimulus”. The nervous system adapts to resistance training which also contributes to the increased activation of the primary movers while coordinating the activation of other relevant muscles. (1)

This process allows for improved explosiveness over time due to these important neural adaptations. The progression of explosiveness from doing Clean and Jerks often translates to other movements where the ability to be explosive is beneficial.

Many of us don’t even realize the positive effects high-intensity weightlifting can have on our cardiovascular systems. Both aerobic and anaerobic activity has been shown to prevent Cardiovascular disease. (2)

Many people suffer from a Cardiovascular disease worldwide but simply introducing more activity like weight training could help strengthen your overall system and promote well-being.

Clean and Jerks are fantastic for cardiovascular health since they require a lot of exertion while involving the entire body in such a full, extended range of movement. (A lot of sweating and effort to get the weight up… twice)!

If you don’t have a strong and muscular core then you’re not doing something right. Your core is an extremely important part of your ability to do essentially everything physical. A strong core supports balance, stability, posture, and your back, during any type of lifting.

A strong core is absolutely essential for lifting heavy poundages, so that’s why Clean and Jerks are a wonderful choice if you want to develop your core to the fullest. (3)

Why is a balance so important? Well, if you’re an athlete, a good balance is not an option. You simply cannot perform at a high level without good balance. Every physical activity requires having proper balance and it’s also necessary for normal functions in everyday life.

Balance is especially important for exercise and weight training… how ironic that Clean and Jerks improve balance for these specific activities.

The stronger and more explosive you are, the better you are going to perform when it comes to physical activities and sports. Your athletic performance depends on the strength which Clean and Jerks happen to provide. (4)

If you think about it, many athletes train with resistance in nearly every sport and there’s a reason for this. Our bones, muscle, and joints need to be as strong as possible to create greater power output. 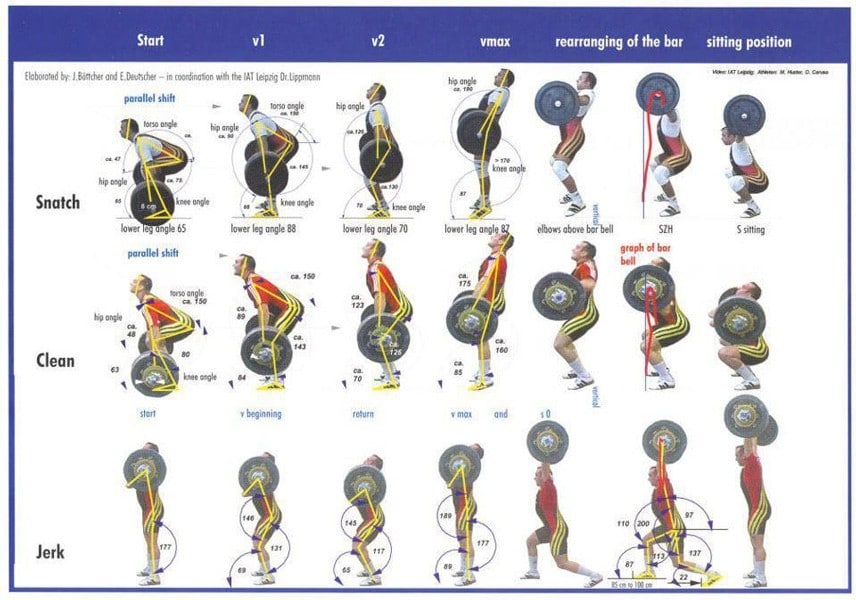 Weightlifting has been shown to improve mental health and give a nice mood boost. (5)

Weightlifting releases endorphins in the brain which can greatly reduce symptoms of depression and anxiety in most people. These endorphins reduce the perception of pain by interacting with the brain. Now, this may be more definitive for some people but everyone is different so results will vary.

However, research has proven that mental health improvements do exist as a result of weight training. (6)

This is one of the greatest benefits of Clean and Jerks. Muscle growth is a pretty standard side effect of weightlifting and since this is a full body movement, every muscle gets a respectable amount of stimulus through the major stress Clean and Jerks place on muscles.

There’s really not a muscle in the human body which Clean and Jerks do not stimulate to some degree whether directly or indirectly.

Studies have shown weight training to prevent and reduce the symptoms of chronic disease like Type 2 Diabetes and Heart Disease. (7)

Many people suffer from chronic disease due to a lack of activity (We are not made to be sedentary). Clean and Jerks do provide intense movement of the body and that’s why they can contribute to disease prevention.

This may very well be the driving force for why we strive to be physically superior (It’s naturally within us to be this way). Improving self-confidence is an amazing benefit of the Clean and Jerk because who doesn’t want bragging rights… right?

Well, that’s not the main reason but clean and jerks are a great way to push yourself to the limit, which in turn does boost self-confidence.

The Clean and Jerk is a fantastic movement but it’s not for the faint of heart. However, the benefits do speak for themselves as it is an exercise prestigious enough to be a main Olympic lift!