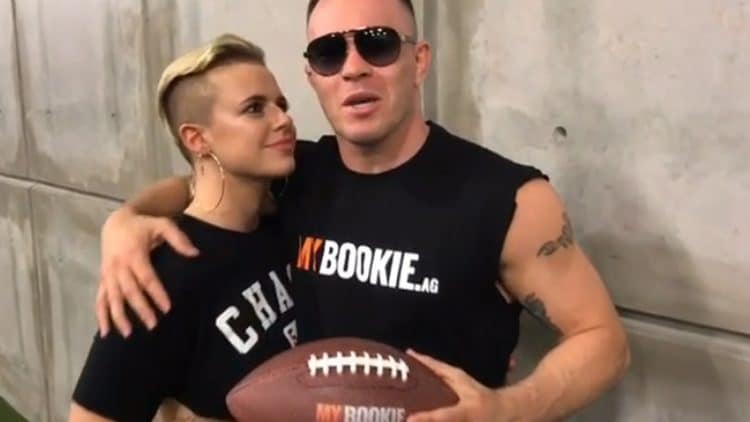 The Super Bowl game between Los Angeles Rams and New England Patriots was played yesterday. Patriots defeated Rams in the lowest scoring final ever. The match ended with the result of 13-3.

It seems Colby Covington has some kind of sponsorship deal with “My Bookie”. In his latest Instagram video, “Chaos” talked about “the winner of the big game”, and even butt-slapped girl to persuade fans to follow his betting tip. Here is how it looked like.

Who’s gonna win the #BigGame tonight? America’s Champ and @realmybookie got you covered! Hit the link in my bio and Use code Covington50 to get a 50% deposit bonus. They have tons of prop bets you can bet- color of the Gatorade shower, coin toss, will Gronk have 69 yards and much more. #Patriots #Rams #SuperBowl #sb53 #SuperBowl53 #SuperBowlSunday #TheBigGame #larams #newenglandpatriots

Colby Covington was the most serious candidate to fight Tyron Woodley, but it didn’t come to fruition as UFC gave an advantage to Kamaru Usman. “The Nigerian Nightmare” is set to meet “T-Wood” in the co-main event of UFC 235 for the UFC Welterweight title. Covington was furious and trashed UFC and lying Dana White.

What are your thoughts on Colby’s latest video? If he fails in UFC, at least he has a bright future in the world of betting!

Is Kai Greene Making A Secret Comeback To The 2019 Olympia?

Rapper 50 Cent made headlines following his surprise Super Bowl LVI halftime appearance, though for all the wrong reasons. After...

Arnold Schwarzenegger is getting in on the Super Bowl fun before America's favorite pastime is here on Sunday. The Los...