Get ready for Super Bowl Sunday with Arnold Schwarzenegger and Salma Hayek. 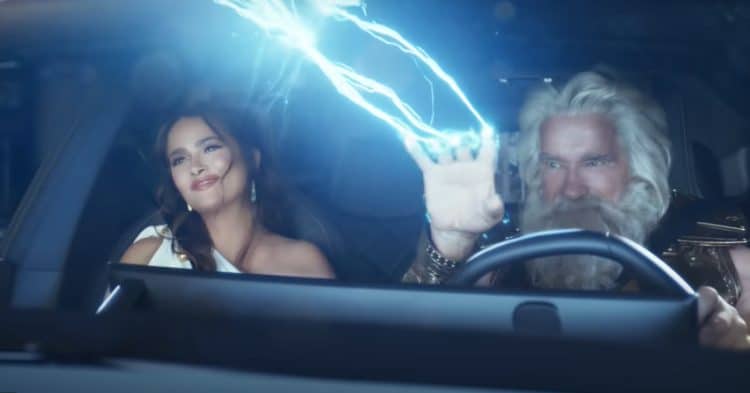 Arnold Schwarzenegger is getting in on the Super Bowl fun before America’s favorite pastime is here on Sunday. The Los Angeles Rams will play against the Cincinnati Bengals at Super Bowl LVI, and you can catch Greek gods Schwarzenegger and Salma Hayek during commercial breaks.

The commercial opens at Mt. Olympus with Hayek and Schwarzenegger retiring and heading to Palm Beach, CA. to retire. Playing Greek deities, the pair took part in a fun Super Bowl ad for the newest BMW electric model.

A storied bodybuilder and actor, Arnold Schwarzenegger is a living legend and still makes an effort to keep his name relevant even if it means transforming into a deity. After parlaying his bodybuilding career into the acting landscape, Schwarzenegger remains an American cinema and television icon.

The biggest game in America attracts a massive audience, but there is a large faction of people who sit through the NFL game to watch the commercials. Part of what makes the NFL’s Super Bowl game such a driving force is the economic power behind it. In 2020, companies advertising for the in-game Super Bowl commercials spent a total of 449 million dollars so that you and your family can sit back, enjoy some nachos and get a good laugh.

With the rise of electric-powered cars in recent years, Germany’s BMW luxury vehicle line has released the latest and greatest of their smart car selection. Being hailed as the BMW iX M60, you can look at the all-electric performance vehicle on TV this Sunday or get an early look now.

We previously reported on Arnold Schwarzenegger playing Zeus. At the time, the world was uncertain as to what exactly the bodybuilding legend had planned, as his original Instagram post only gave us a few cryptic details. The post simply read, “Coming February 2022”.

After teasing the mysterious project, fans and media alike were clamoring to find out when and where we could catch Arnold Schwarzenegger as the Greek god Zeus. Salma Hayek who plays the Greek god’s wife, Hera, also joined the fun.

Hayek is a renowned actress and has taken part in many major movie roles. She established herself on the Hollywood scene after appearances in films like, Desperado, From Dusk Till Dawn, and Wild Wild West. Hayek has also led a successful career in directing and producing television shows. The Hollywood actress has acquired four Emmey Awards nominations for her television work.

This BMW ad will be the first for the company since 2015. At that time, BMW was advertising a new electric vehicle. As the commercial opened at Mt. Olympus, home of the gods, Hera, played by Hayek, retired with Zeus and decided to head to Palm Springs, CA.

Below you can find the full video from BMW on YouTube.

“My fellow gods, the dark skies have spoken. Schwarzenegger exclaims in the BMW ad.

It is time for Zeus and I to retire. Hera says.

But where will you go? Zeus responds.”

After the scene cuts from Mt. Olympus from Zeus’ lightning strike, Arnold is floating on a watermelon pizza raft in a giant pool located in Palm Springs, CA. Zeus’s downtime is interrupted which is a continuous theme throughout the ad. The Greek god is bothered by a neighbor who needs help powering her electric tool to cut her grass.

While Zeus is taking a load off attempting to golf, the god is once again interrupted by a fellow golfer who needs a jump on his golf cart. It didn’t stop there, Schwarzenegger also had technical difficulties microwaving some food despite electricity pouring through his fingertips. The ad wraps up with Hayek offering Arnold the new BMW vehicle to cheer him up.

Super Bowl Sunday is almost here. Arnold Schwarzenegger’s BMW commercial is precisely the type of content that attracts viewers from all walks of life — not just football fans. While it’s not a movie or TV show, fans can expect to see the famous bodybuilder-turned-actor in between the biggest sporting event of the year.