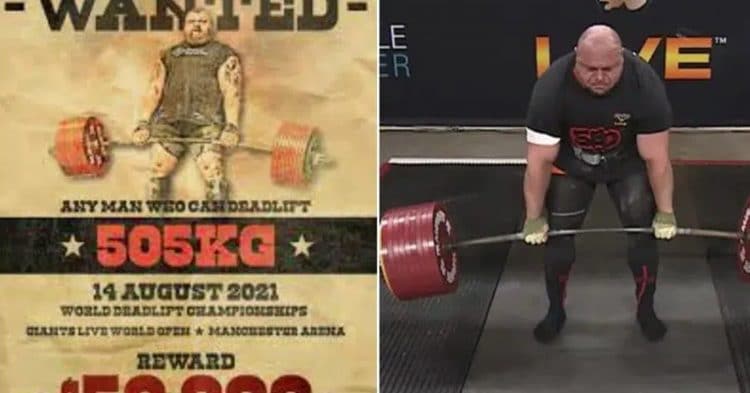 I have good news and I have bad news. Let’s start with the bad news first, no new world records. Eddie Hall and Thor are still unbeaten in the deadlift. Guys are inching ever so close to them but Eddie is still the only human to deadlift 500kg and Thor is still the only human to go beyond 500kg in a deadlift. The good news is, maaan the guys are really closing the gap between them and the mythical 500kg deadlift.

Just yesterday, 6 new Strongman entered the 1000lbs(450kg) club in the deadlift and two guys attempted the 505kg- Pavlo Nakonechny (who is just 23!) and Ivan Makarov who, I think, now holds the record for most attempts at 500kg+ deadlift. The first time he tried 501kg in Russia was about two years ago, then a couple of months back he tried 502kg, and yesterday he came very close in pulling 505kg but it didn’t go past the knees. I’m 100% certain we will be seeing both get another shot at the deadlift.

As mentioned above, six new people can now brag that they can deadlift 450kg. The newest members of the 1000lbs club are; Oleksei Novikov, Evan “T-Rex” Singleton, Gabriel Pena, Nedzmin Ambešković, Pavlo Nakonechnyy, and England’s own-Adam Bishop.  Speaking of the deadlift, it’s also worth mentioning that some top contenders for the 505 had to pull out for various reasons. Now let’s circle back a bit to Pavlo and Ivan.

Pavlo’s weight choice was very bizarre as he went from 453kg as his first attempt to a 50kg jump in his second attempt which was the 505kg record attempt. Which, any gym bro can attest that is an insane jump, regardless of how much is already on the bar. Increasing the weight by half of that(25kg) is a solid jump let alone 50kg. Of course, the result was the bar barely broke the floor before Pavlo lowered it down and let the deadlift record stand for another day.

Ivan played it a bit safe, before going for a 505kg he pulled 475kg, weight closer to the record so the jump isn’t that extreme. He’s a great puller off the floor but when the bar comes to the knee height level that’s when he starts to struggle. Something which was evident in all his +500kg attempts. If he manages to fix the lockout issues, he WILL be pulling 500 and 505 and maybe even more.

Outside of the obvious contenders in Pavlo and Ivan, the question remains- who will be joining Eddie and Thor in the +500kg deadlift club?

Peiman hasn’t really competed internationally due to Visa issues, which is also the reason he wasn’t in Manchester yesterday, but just one glimpse on his Instagram will reveal that he means business. His best lifts are 450kg(raw) and a 492kg with a deadlift suit. Seeing as Pavlo and many other Strongmen pulled similar deadlift numbers with a full deadlift suit on as Peiman does raw, it’s safe to say he has 500kg in him.

Asko is a name that often got thrown around as “The Guy” that will 100% take the spot above Eddie and Thor in the deadlift.  He’s an Estonian powerlifter who had the Strongman world buzzing with excitement when he posted a video of him pulling 482kg RAW. Which, had he performed that yesterday in competition would be the biggest deadlift of the night. He also has videos of doing 450ish for a double and honestly, just typing this sentence out makes me think that this is the man for the job. He is the one that will one day have the biggest deadlift world record.

Nedzmin has been building his deadlift under the watchful eye of Sebastian Oreb or as you may know him by his Instagram handle “@australianstrengthcoach”. Yes. the same strength coach that Thor worked with during his reign of terror which culminated in him winning WSM in 2018 and pulling off the 501kg deadlift in 2020.  Nedzmin hasn’t really been competing internationally but make no mistake about him. He’s a beast of a man and he came in second in the deadlift yesterday.  Above some very impressive names like Oleksei Oleinik(WSM ’20), Evan Singleton(overall winner of the entire Giant Live event), Pavlo Nakonechnyy, and Rauno Heinla who regularly pulls 450kg without much effort.  Just for the fact that he’s being trained by Oreb, should be more than enough reason to conclude he will pull 500kg one day for sure.